Big Blox makes getting winning paylines easier than ever with its main feature: big blocks! I can’t wait to return to this game and see how well it’s kept up over the years.

Released in 2016 and created by developer Yggdrasil, Big Blox has everything go its way. Even now, games released by this developer years ago make newer slots by other developers look bland in comparison and Big Blox is no different. The colours jump off the screen and each symbol oozes personality.

We find ourselves deep in the jungle, uncovering what might be the altar of some forgotten tribe. They seemingly worship idols and totems and as such, the game operates in much the same way.

Somehow this theme is very popular among slot developers. The most famous example might be Netent’s Gonzo’s Quest. Yggdrasil itself has multiple attempts, including Jungle Books based on the famous story by Rudyard Kipling. I can see why: it lets the creators go wild on extravagant symbols, beautiful lush backgrounds and entertaining features.

Big Blox keeps things relatively simple. There’s only 1 feature really worth mentioning in the game but it also easily carries the entire slot. Combined with the amazing graphics and I’m surprised Big Blox isn’t more popular than it already is.

As usual, Yggdrasil decided to not just spend a lot of time on the visuals but also spend time crafting a suitable soundtrack. A catchy, indigenous song plays in the background as the reels spin. Get a big win and the game amps up the anticipation with a celebration tune as the coin total goes up. In my opinion, both the look and sound of the slot help a lot in immersing me into the game.

The symbols of Big Blox fit the slot well. While the lower-paying symbols are based on card suits they were redesigned in such a way that it’s not immediately obvious. Meanwhile, the higher-paying symbols are unique images of what I’d describe as idols. It’s all done in the same absurd, cartoony style that I think compliments the setting very well.

Each of the symbols is subtly animated, with glowing eyes or mouths. It’s not much but it helps to quickly see the symbols that are on a winning payline before the reels stop spinning.

As I mentioned before, Big Blox really only has 1 major feature to talk about. I am generally pretty neutral about the number of features a slot has. Some games benefit from having a lot of them, especially when they work well together. Other slots are a blast to play because they keep things simple with only 1 or 2 features. I think Big Blox sits comfortably in that second category.

The features it does have are:

You might have already noticed when I listed the features but the maximum size of the Colossal Symbol is 5x3, which is the entire playing field! In my time playing, I haven’t seen it happen but it makes it more than possible to get the max. win of 97,200x your bet.

Its Medium Volatility suits the game perfectly. I found the game to be very liberal with its wins, and it felt like it was hard to drop down in funds too much too fast because of the steady number of wins. Add to that the ability to pick a bet between $0.25 and $100 and there’s a lot of flexibility in the amount of risk you want to take.

The Wild Symbol can also be a Colossal Symbol but as it has no value on its own, its maximum size is 4x3.

Big Blox is one of those slots that looks pretty but simple at first glance and I must admit that’s how it struck me the first time I played it. Sticking with it for only a little while and you’ll see how much fun the Colossal Symbols can be. I’m glad I came back to it these years later to play it again and really immerse myself in the gameplay.

I thought the entire presentation of the game is something more slots should aim for. The lack of features can be something of a detriment for some players but I enjoyed its simplicity. I often put on Autoplay and simply watch the game play itself.

To me, Big Blox has been one of the most enjoyable slots I’ve played in quite a while. I’ve found my personal interest over the years to slowly starting to shift to simpler slots with fewer features that are well executed. This in contrast with my preferences when I was younger, where I liked very original slots that would include a bunch of features.

Big Blox shows that often less is more. It’s an easy slot to get into, quick to learn and after that, it’s just a matter of watching the reels drop!

Browse casinos with Big Blox and other slots from Yggdrasil. Create an account and try the game for free before making a deposit.

You can play Big Blox in English, Finnish, Swedish, German and 18 other languages. 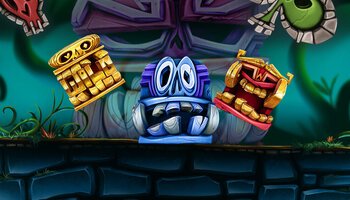