The Greatest Train Robbery is a slot based on a famous film as well as the generic image a lot of people have of the cowboy days, where the Wild West was the place for daring capers and big hauls.

Set in the Wild West, The Greatest Train Robbery transforms this idea into an enticing 5-reel, 4-row slot with an impressive 40 betlines. The game was developed by Red Tiger and released in 2018. I thought the game looks very nice, giving us a top-down view of a rustic town with the reels like train tracks running through the city square. We see the tiles run down on the roofs of trains as different robbers try and make off with the money hidden inside.

There are a lot of fun and interesting details hidden in this slot. The background shows us the top-down view of the town with different buildings flanking the tracks. Whenever a special feature is triggered, robbers appear on horseback, throwing dynamite on the tracks to trigger a re-spin. It all looks incredibly dynamic while still staying in line with the theme.

The music fits the setting as well, using the expected country music to drive the slot. Train sounds and explosions are well-used to emphasise the different features and spins. It all played off each other very nicely.

Most of the symbols in the game make sense considering the theme of the slot, with silver dollars, gold bars and gems filling these different train carts. The low-paying symbols are traditional card symbols which might be a little less relevant but we all remember the images of rugged cowboys playing cards in a saloon so I can forgive this lack of creativity.

Since there are quite a few different symbols and the features don’t really impact the ability to get wins, there is a Medium Volatility. I found wins to be rather spaced out but when they did occur they didn’t have to be huge to make back the coins spent. In general, my funds stayed rather steady. Players can pick a bet between £0.10 and £40 to negate the risks.

The game doesn’t have an extensive number of features but enough to keep it interesting. The features are:

The different features are all part of the base game but appear more frequently during the free spins mode. I found the Wilds to be very rare but that was compensated by the Random Wilds feature where a number of Wilds were added on a single spin. This could often create a dozen or so winning paylines at a time.

The Re-Spins also triggered infrequently, spaced out to the point that I would consider them quite rare. The Re-Spins would trigger when a robber appeared on the side of the reels and throw a piece of dynamite on the screen, causing one reel to respin. The explosion could also cause multiple reels to re-spin at the same time.

These re-spins would often only alternate 1 of 2 symbols, making it likely that the entire screen was largely filled with the same symbol. Even though it wasn’t especially common, the result was almost always positive.

I found the Free Spins to be the rarest, only triggering when there were 3 Free Spins symbols on the screen at the same time which did not occur very often. Triggering the Free Spins mode was nice but not automatically beneficial. The features that appear during the base game seem to show up more often during this mode but they’re not guarantees for any big wins.

All in all, I found the features to be interesting and fun but not regular enough to make the game shower me with wins. It’s something to keep in mind while you’re playing.

The Greatest Train Robbery is a beautiful slot with a tonne of style. The setting is injected into each element of the game and even the special features are made a part of the theme. Cowboys racing across the screen, throwing dynamite and different train carriages carrying the symbols all add to the effect.

Players that enjoy a classic slot will still have a good time playing the game as it barely adjusts the base-gameplay. The only real difference is the slightly larger playing field. Meanwhile, the features are uncommon enough to only feel like the occasional interruption to the base gameplay.

In comparison, players that enjoy modern games will also get a kick out of this slot thanks to the incredible amount of detail that the developers put in the game. The features might not be too extravagant but they still have a sizeable impact on the gameplay, if they show up that is.

Browse casinos with The Greatest Train Robbery and other slots from Red Tiger. Create an account and try the game for free before making a deposit.

You can play The Greatest Train Robbery in English, Finnish, Swedish, German and 18 other languages. 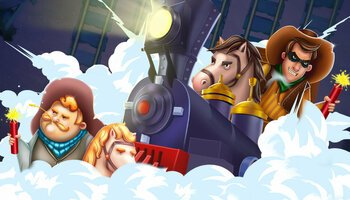