The absolute worst has happened, and the dead are walking the Earth. In 1 Left Alive, you are the sole Survivor trying to look for other (living) people in the world of the zombie apocalypse. Will you be still breathing by the time of sunset, or have you found your place with the walking corpses and crave for brains?

1 Left Alive is a game made in 2019 by 4ThePlayer, and this slot is the second release of their entire history. The game is set in the distant future, where the feared zombie virus has swept over the entire Earth and re-animating the dead. A sole survivor is fighting for her life and trying to keep the distance between her and the zombies. Thus, this slot is a perfect choice for the fans of horror!

As a horror fan myself, I did find 1 Left Alive very intriguing. But, when I first saw the game I believed it to be much older than it really was. This is because the style kinda reminds me of the older classic slots than modern ones. Most of all, 1 Left Alive resembled NetEnt’s Zombies - which sadly isn’t available for playing anymore.

1 Left Alive has medium volatility and an RTP of 97% so it’s an excellent game for bonus wagers.

1 Left Alive is, despite a bit dated style, a very nicely executed slot. The background is a dark and rainy scene with zombies blankly staring at the player. Sometimes a street light flickers or a lightning strikes, illuminating the walking dead and making the view even more creepy.

However, I like the small details the supplier has included in the slot - like the low-value symbols that have supplies, ammo and food on them. Everything a survivor needs on their journey. I also like the high-value symbols being so vibrant in colour, even when the game itself is very dark and has the sinister ambience.

The music has a heavy influence from the 80’s action movies. It also loops pretty nicely without a too noticeable pause, but the effect sounds don’t fit with it too well which is a shame.

1 Left Alive has five reels, four rows and 1,024 paylines going from left to right. But that’s not all, 4ThePlayer has included its own trademarked feature called Plus+Ways in the game. This feature adds up to 32,768 ways to win, but note that these are not the same as extra paylines.

1 Left Alive is also the very first slot to have this innovative feature. However, Plus+Ways is a bit complicated at first and, on top of it, the supplier’s way of explaining it isn’t the easiest to understand. I try to explain it more clearly down in the list of features, but the best way to learn how it works is to play the game.

The game also has free spins which can be won by landing three zombie hands on the reels.

When you get a winning combination you also get paid for the other identical symbols. The slot calculates the best winning payline for a single symbol and then pays as much for every similar symbol that isn’t a part of the selected combination.

Before starting the spins, you get to choose one of the zombie symbols to become a bloody wild. This is the target for the Survivor. If the reels stop with both the chosen zombie and a Survivor present, the zombie acts as an extra wild called Bloody Wild.

When this happens, every Bloody Wild will stick to its place and slide down by one spot with every next spin until falling off.

You can re-activate the free spins by landing three new zombie hands.

When you play 1 Left Alive on mobile you may choose whether to play with the classic view or activate the BIG REEL Portrait Mode. This mode rotates the reels 90 degrees to the right so that the reels now bring new symbols from the right side and the symbols are bigger than in the classic mode.

BIG REEL Portrait Mode does not change how the game pays or the value of the symbols, so it’s purely a visual feature.

1 Left Alive was the first slot I’ve ever played from 4ThePlayer, which might not be such a surprise as they currently have barely a handful of games to their name. So, I didn’t know what to expect, but I was genuinely surprised by the quality of it, as well by the fact that the supplier already has a trademarked mechanism of their own.

But, I’m not entirely sure if the Plus+Way is better than the feature of winning all ways. After all, “Win all ways” doesn’t really do what it says as a single row of winning symbols only gets paid once and not by all the possible paylines the row hits.

Mechanically the slot worked quite nicely and visually it has some very nice details.

This slot did convince me to keep a close eye of the future releases of 4ThePlayer. I fully enjoyed playing 1 Left Alive and I think it makes a great alternative when getting tired of the slots from more mainstream suppliers.

Browse casinos with 1 Left Alive and other slots from 4theplayer.com. Create an account and try the game for free before making a deposit.

You can play 1 Left Alive in English, Finnish, Swedish, German and 23 other languages. 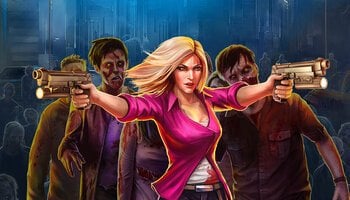 Great game, had a few small wins so for, hope I'll be lucky on this in the near future