10,001 Nights is obviously a slot that is set in the Middle East during the famous period of times when all sorts of stories were being told over an increasing number of nights. Get ready for free spins, a progressive bonus game and stacked symbols.

If you’re at all familiar with Red Tiger, who released this game in 2020, you should get the hint that this was made by them. They have a certain style which is also evident in this game, with the symbols being quite large and the colours used being very deep and rich. The 5-reel, 4-row playing field you’ll be using is filled with symbols drawn in this style. It looks very nice and also does a good job of setting the mood.

The background shows us an open square in what might be Baghdad or another Middle-Eastern city centuries ago. Unfortunately, this image is obscured by the playing field most of the time. There is a lot of motion on the screen while you’re playing, with the different symbols mostly having some type of animation. These can trigger when they’re part of a win but you can also see details like the tiger blinking when they’re not.

All of the symbols are drawn in a distinct realistic style where the use of colours is the main way of keeping them apart. There are the high-paying characters and animals while the low-paying symbols are based on card suits. These look alright but don’t fit the theme quite as well. Luckily, the designers opted to turn these into diamonds which makes a bit more sense.

10,001 Nights has little in the way of a story. There are characters on the screen but it’s unclear who they are meant to represent. The animals that are also used seem to be mostly there for the setting and not so much for any kind of narrative. If the game is trying to display one of the ten thousand stories, it does a poor job showing which one exactly.

Players can get a win on one of its 20 paylines, which lights up the winning tiles and adds a total coin win on the screen. The slot has High Volatility as it will only occasionally grant a natural win, meaning the player will require the game to have a bonus game activated to get their hands on a bigger win. The maximum win is 10,001x your bet, which isn’t just massive but also a fun detail.

If you would like to give the game a try but are a bit wary of the volatility, or you want to make your wins bigger, the game lets you pick a bet between £0.10 and £8 per spin. Even though that’s an extremely limited range when compared to other slots, it does make sense considering the jackpot.

When it comes to the symbols in the game, you can find the following:

10,001 Nights has quite a lot of features which can be activated randomly by filling up one of the three vials at the top of the screen. Filling them up is done by getting the magic lamps on the screen during the base game. It will take quite a while to fill up even one, so be ready for the long haul.

Even though the concept of the vials is rather simple they didn’t do a very good job explaining how it works. The game starts with 4 vials at the top of the screen, filling up from left to right whenever there’s a magic lamp symbol on the screen. Once 1 is filled, that feature activates and can randomly activate again further down the line.

It should be clear that playing this game for a longer period of time is the best approach since unlocking these 4 features is vital to get any bigger wins. In my experience, it will be a very difficult time to get any big wins without these, as even normal three-of-a-kind wins are sparse without them.

10,001 Nights is an entertaining slot with some interesting ideas. The amount of time and work that’s been put into the design is clear, and it’s used to good effect. There is a lot of movement to be seen as well as some amazing drawings.

When it comes to the gameplay, players will be challenged to see if it is their fit. As the different features need to be unlocked first, it can happen that there won’t be any significant wins at the start of the session. This might get better over time as some of the features are unlocked, but there are obviously no guarantees.

In my time playing, I didn’t find the features to be very impactful. Even with all of them unlocked my wins weren’t big enough to compensate for the losses I had made to get to that point. It’s definitely something to keep in mind if you’re playing to win. That said, I did enjoy my time playing so as a pastime I would call it suitable.

Browse casinos with 10,001 Nights and other slots from Red Tiger. Create an account and try the game for free before making a deposit.

You can play 10,001 Nights in English, Finnish, Swedish, German and 23 other languages. 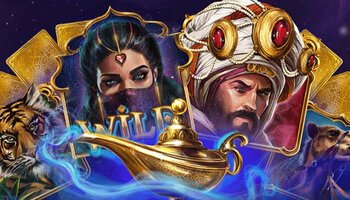