This is your chance to meet legendary creatures by setting sail to the 1429 Uncharted Seas. Will you meet the fearsome Kraken or mystical mermaids as you head out on this oceanic adventure. This slot, produced by Thunderkick, is a five-reel, 3 row game with 25 paylines.

Even though it was released back in 2016 it still looks gorgeous and feels relatively modern. This is probably due to the ethereal pastels used which perfectly complement the mythical sea creatures theme.

The game plays out on a beautifully coloured map within the captain’s quarters. The soundtrack is measured and subtle but the clever use of FX brings in the thrills.

Each symbol has been meticulously designed to look like ancient representations in mosaic. There’s a total of 10 symbols in play and even the lower-paying tiles are beautifully crafted representing the sun, moon and stars.

Enter the bonus round with three or more bonus symbols depicting a compass. Three bonus tiles will yield 10 spins, 4 tiles will yield 20 spins and 5 tiles will gift you 50 free spins. Once the free rounds start the screen will go darker and a thunderstorm will approach. You will then sail the tumultuous seas in search of forbidden riches. The free rounds are played exactly like the base game, complete with expanding wilds.

This is probably the most exciting feature of the game. The developers knew this and created a wonderful animation to go with it. If a wild tile, representing your ship, lands on a winning payline it will expand revealing a colossal sea serpent.

Expanding wilds appear only on reels 2,3 and 4 and they will substitute for all symbols except the bonus symbol.

As the reels spin, you will come face to face with many mythical creatures in the slot. With its low volatility, it is understandable that the maximum yield peaks at 670x. But with an RTP standing at 98.5%, 1429 Uncharted Seas is the perfect game for the novice slot player. It also makes it a good choice if you’re trying to wager the last bit of bonus money.

Being such a straightforward slot, and having such aesthetically pleasing graphics, makes it a relaxing game to play. Yes, it might not get your heart beating fast like some others out there, but it still offers quite a bit of excitement.

I managed to enter the bonus round quite a few times, however, the wins were always on the disappointing side and averaged between 15x and 20x. I also had a bonus round where I only received a disappointing 5x. But I also noticed win around the 12x to 15x in the base game. This is thanks to the expanding wilds. A well placed Sea Serpent can yield a few riches even in the base game.

Even though I tend to prefer highly volatile slots I found myself mesmerised by this game. Looking at the stats before playing, I didn’t think this slot would deliver the right kind of entertainment I usually seek out in slots. But it did!

Browse casinos with 1429 Uncharted Seas and other slots from Thunderkick. Create an account and try the game for free before making a deposit.

You can play 1429 Uncharted Seas in English, Finnish, Swedish, Norwegian 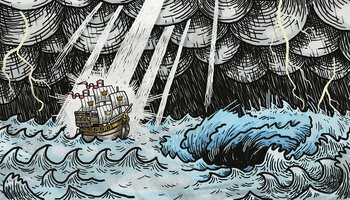