1942 Sky Warrior is set in the middle of World War 2 where brave pilots fought each other over the skies of Europe. In this slot, players follow members of the RAF as they battle it out, using wilds, scatters and free spins to win the day.

Developed and released by Red Tiger in 2021, the game brings to life a very dark period in our history. The slot does this in a pretty respectful way, not getting too close to the realities of the time. Instead, we see a number of pilot characters on the 5-reel, 4-row playing field with 30 paylines. Wins are celebrated with a special insignia.

In the background, we can see some fine art of a duel taking place in the sky, largely obscured by the reels. There are some subtle animations but these don’t really help bring the setting to life. Similarly, some of the symbols will show an animation when part of a win. These aren’t as extravagant as we sometimes see in other games.

It is nice to see a different theme, with aerial battles being an underexplored basis for a lot of slots. I did think it all looks very nice with great art and some good but subtle animations. The main issue I have is that there isn’t that much to see. Most of the symbols are traditional card letters and the idea of fighters in the sky isn’t used much in the gameplay either.

1942 Sky Warrior makes use of the classic split between low- and high-paying symbols to populate the reels. The high-paying symbols show a variety of fighter pilots looking at the camera. Although they all look distinct, the game makes no effort to give them any sort of personality. The low-paying symbols are based on card letters, made to look like insignia.

Players should prepare for a game with High Volatility. The game does not grant wins very often and even when it does, they tend to be quite small. As a result, I found my funds to drop rapidly and never felt like I had the opportunity to recover. The RTP of 95.68% is considerably lower than the average, which doesn’t help in making the slot feel accessible.

If you’re looking for a massive jackpot to excuse the high volatility, you won’t find it here. The game offers a maximum win of 999x your bet. Although any sum is nice to win, in this case, it feels too little to make the effort worthwhile. Players can pick a bet while they play, choosing one between £0.10 and £100 per spin.

1942 Sky Warrior keeps things rather simple in regards to its features. There are a few that change the gameplay somewhat but they have a limited effect.

Players will spend most of their time in the main game. This will usually play out like a classic slot, with few changes to the standard gameplay. Wilds are pretty rare and even when they do appear aren’t likely to be part of a win. When they are, they will remove all lowest-paying symbols on the screen and cause new ones to drop in. It can also result in the pilots being upgraded, paying out more when part of a win. This depends on the kind of win the Wild is a part of.

This sounds like a nice feature, but the new symbols can be the lowest-paying symbols again. There is no reason to expect that the re-spin will cause a bigger win to activate. Another element is the upgraded version of the high-paying symbols. These are present during the free spins mode. The only difference is a slight tweak in their appearance and a higher payout.

Getting the free spins to activate isn’t as hard as one might fear, but it still won’t activate often. During this mode, Wilds appear every spin. The upgraded high-paying symbols pay out more if part of a win, but the game still doesn’t like to hand those out anyway.

1942 Sky Warrior has an original idea but seems to fail to profit from it. The graphics are good and it looks very appealing. There are only a few animations and with all the high-paying symbols looking basically the same it becomes stale quite fast. The use of stacked symbols also means that every spin makes the screen look rather drab and boring.

The gameplay is probably the weakest part of the slot. There are very few features and the ones that are there have a negligible impact on the gameplay. The slot already has a low RTP and this does not make it worthwhile to stick around.

If you’re someone who is drawn to fighter combat or you prefer slots that keep things simple, this might offer you some decent entertainment. The slot is easy to understand and quick to get into. The lower jackpot won’t appeal to a lot of people but if that’s not something you care about, you will probably get some enjoyment out of this.

Browse casinos with 1942: Sky Warrior and other slots from Red Tiger. Create an account and try the game for free before making a deposit.

You can play 1942: Sky Warrior in English, Finnish, Swedish, German and 18 other languages. 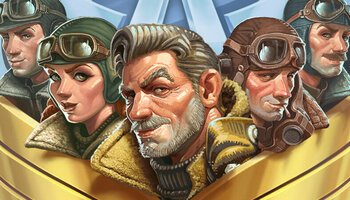