2 Gods Zeus Vs Thor puts two of the most well-known deities in Greek and Nordic religion against each other in a fight for dominance. This slot includes paylines from both sides, a free spins mode and the choice between Zeus and Thor.

This slot was created by the relatively new developer studio 4ThePlayer who released the game in 2020. It features an at first glance standard 5-reel, 4-row playing field with both of the gods flanking it on either side. I have to give special commendation to the design team since there is a lot of creativity in this game. One of the things that I appreciated the most was the use of original art for the low-paying symbols too.

There aren’t a lot of animations in the game unfortunately, most of it only consisting of winning tiles lighting up. Speaking of winning, there are 2,048 paylines in the game but it still comes with High Volatility due to the low payouts per win. Most of the time, the wins you get aren’t high enough to compensate for your spins causing a slot drop in funds.

When it comes to the music, the slot keeps it rather generic with a vibrant action song that didn’t strike me as belonging to either the Nordic or Greek setting but instead focusing on the fight theme. It sounds fine and changes slightly depending on picking either a blue or a red spin.

2 Gods Zeus Vs Thor has a selection of symbols that are associated with either Zeus or Thor. Getting a win is always possible with either God selected, but choosing the right God will grant a 2x multiplier to a win that matches their colour. The low-paying symbols are runes and Greek symbols instead of the usual card letters which is a simple but effective way of integrating them into the game.

Because the game uses two different gods from two different areas, every symbol has a counterpart. Both of them are worth the same and count the same. The only difference depends on the chosen colour for that spin: Red for Zeus and Blue for Thor. If you get a win with Viking symbols after picking blue, that applies a multiplier. If you picked Thor instead, you get the regular payout. It’s not a matter of getting the win, rather how much is awarded.

2 Gods Zeus Vs Thor has its fair share of features without becoming too overwhelming. Things that are happening on the screen can be explained easily and it will probably take a player only a little while to figure out what they’re looking at.

Every spin, the player has to select which God they want to support and pick the associated colour. This will only change the colour of the outline of the playing field. If there’s a win, the game will show it by lighting the winning tiles up with crackling lightning.

The Wilds are stacked but don’t always appear to fill the reel. They are actually very rare and I hardly ever saw them. The same with the Win Spins symbols, which almost never appear. Triggering the free spins mode was exceedingly rare but when it did activate it usually resulted in some bigger wins.

Even with the free spins, I found my funds to slowly but steadily shrinking. The game is not very good at granting bigger wins and makes it a rather annoying experience to watch. The features make sense once you understand the mechanic of the two gods fighting each other.

If you are a fan of ancient mythology, 2 Gods Zeus Vs Thor is a slot that offers two of them in one simple package. I liked the references that are included in the different symbols, including the original approach at the low-paying symbols. Players pick either colour every for spin which might be annoying for those that just want to spin but there are some advantages to paying attention.

The game offers only a small number of features that amplify the high volatility. Any wins you get are often multiplied if you picked the right God, and you are guaranteed wins and multipliers every spin of the free spins mode.

To compensate for the risk somewhat, players can pick a bet between £0.10 and £20 per spin. The max. win of 15,360x your bet is quite massive but it’s more likely you’ll see your funds shrink so keep that in mind. As a slot, I thought it offered a good time with some original ideas but it’s hard to say if it will appeal to the majority of players.

Browse casinos with 2 Gods Zeus vs Thor and other slots from 4theplayer.com. Create an account and try the game for free before making a deposit.

You can play 2 Gods Zeus vs Thor in English, Finnish, Swedish, German and 21 other languages. 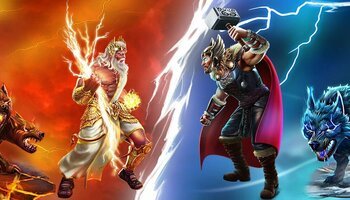