Slot players who want to try their hand at inventing the wheel and building Stonehenge can win cash prizes in one of Betsoft's older games, called 2 Million B.C.

The game represents the highlights of life in the Stone Age. I am pretty sure that finely-crafted urns with a gilded dollar sign weren't in vogue yet, but there were plenty of clubs (wooden ones), cave drawings, bonfires, and necklaces made of rocks.

All of these objects can be worth real cash if you land them in a matching-symbol sequence on one of the 30 paylines. I can remember being charmed by the game's graphics and animation. In that regard, 2 Million B.C. is just like its Betsoft siblings that were released in the early 2010s.

The base game can be fun to observe and the payouts are actually alright (up to 500x your payline stake for five of a kind) however 2 Million B.C. doesn't have anything special to make it stand apart from other Betsoft games like Gold Diggers and Arrival.

So is there anything that can make you enjoy the game then? Sure. There are three bonus features which include a free spins bonus and two pick-me events where you can play for a chance to land a decent cash amount.

The graphic design is quite wild actually, with excellent animated bits which is very much typical for Betsoft slots from that era. Even though the winning symbols can spring into life for every single winning outcome, 2 Million B.C. doesn’t have slow gameplay.

If you haven’t played the game before I can recommend that you let the animated introduction give you the background of the story - the little movie looks like a cartoon and I find it amazing that Betsoft has gone through the trouble of creating that part just for a slot game.

The sound is quite on point too, with gentle tribal drumming and sound effects that represent the various animals and objects on the reel set. My favourite part is the moves that the caveman pulls out when he gets you a winning outcome - he is pretty happy to see it happen and gets into a party mood.

I guess they didn't need any wild symbols back in the year 2 Million BC because there are many symbols that can pay for two of a kind and that makes for frequent winning outcomes. I didn't mind the wild being absent because there are three extra features in total.

The bonfire symbol triggers a free spins bonus that picks the number of spins at random. This feature triggered twice and both times the game didn't give me more than five free spins (four and five, respectively).

I can conclude that there is little to be excited about this particular form of a free spins bonus, simply because there aren’t any win multipliers, sticky symbols or respins. On the other hand, if you get three or more bonus symbols 2 Million BC will reward you a greater number of extra spins.

The acorn symbols are collected in the top-left corner of the reel set. When the bee has carried three acorns in that area your caveman friend gets to use them as projectiles in an effort to knock-out the sabretooth tiger. It's a pretty simple game, you click your mouse or tap the screen and the caveman will eventually hit the big cat in return for a random, but moderate, instant cash win.

This bonus feature puts you against the sabretooth again. This time, the big cat is guarding a diamond in the rough and your objective is to choose a tactic in order to approach it and snatch away the diamond, in return for a moderate cash prize.

I found this bonus feature to be slightly better compared to the other two because to trigger it you need to land three or more diamond symbols on a payline, which can pay 40x, 100x and 200x your payline bet.

My conclusion about the extra features of 2 Million BC is that they are very average both in payout and the thrill of getting one to trigger. The only benefit that I can cite in this regard is that the "pick-me" rounds come with a guaranteed cash prize, unlike the free spin bonus.

The paytable structure of 2 Million BC is the only thing that I am pretty comfortable with. I said that there are many symbols (six in total) that can pay for two of a kind on a payline, from left to right. The amounts are low but it's better than not getting anything.

On the other hand, you can win your wager back starting with the fifth symbol, looking from low to high. It's the club and three of these on a payline can pay 1x your bet. The necklace, cave drawing, urn and the gem can pay between 0.33x and 0.83x your bet.

The high-paying symbols are quite alright, I think, and they aren't too uncommon to land on a payline in threes and fours of the same kind. The biggest payouts are reserved for five of a kind. I was a bit surprised that the game treated me to a few such outcomes for the wheel and Stonehenge symbols.

The high-paying symbols have the following structure:

The game kept me playing not because of the bonus features but because of the base game. I couldn't believe it either, but the medium volatility comes through perfectly as such and one of the boons of 2 Million BC is that three of a kind can land on the paylines at a good frequency.

One caveat from me is that you can choose the number of paylines, but to get the most of the game you need to have all 30 active, which translates to bets of at least 30p per spin.

Would I recommend the game? I don't think so. The RTP is appallingly low (91.94%) and the bonus features could have been made more exciting and rewarding.

Play 2 Million BC for free

Browse casinos with 2 Million BC and other slots from Betsoft. Create an account and try the game for free before making a deposit.

You can play 2 Million BC in English, Finnish, Swedish, German and 21 other languages. 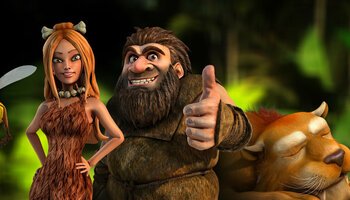