24 Hour Grand Prix is set at the famous Le Mans 24-hour race that takes place once a year, giving teams of drivers the chance to compete as they drive for a full day. The slot not only features a wide collection of cars you’ll also find Colossal Wilds and Free Spins in this game.

When the game starts, players are treated to some excellent graphics that Red Tiger delivered. It’s no wonder really, considering the slot came out in 2020. With its 6-reel, 4-row playing field it’s a little larger than other slots but there are only 30 paylines on the slot. This makes it a little harder to get a win, one of the reasons that it lands on High Volatility.

You’ll find a variety of symbols in the slot, roughly split between the more generic low-paying card suits and the original high-paying symbols. These are depicting different types of cars used during the 24 Hour Grand Prix, as well as a few different items that might play a role during the race.

I found the look of the game to be quite impressive even though it didn’t have as many animations as I would have liked. The background shows a bend in the circuit and I can picture how other studios would have had cars race past. Unfortunately, these designers decided to keep it static which takes away somewhat from the active setting.

The symbols in the game look nice but aren’t very heavily animated or particularly interesting to look at. The different cars look nice but as someone with little knowledge or interest in them, I couldn’t tell you what I was looking at. They also aren’t animated in an interesting way, even though having them race off the screen during a win seems like an obvious choice.

The symbols you’ll find in 24 Hour Grand Prix include:

There are quite a lot of symbols but the playing field is also a bit larger than normal. Wins do still often depend on Wilds to happen, and you shouldn’t count on getting six-of-a-kind wins all too often. The Free Spins symbols appear quite regularly but getting the mode to activate is tricky.

Players can pick a bet between £0.10 and £40 per spin, and there is a max. win of 4,000x your bet to look forward to. I found my funds to stay relatively stable but also a little below what I started with. Don’t expect any huge wins to happen often!

24 Hour Grand Prix doesn’t have a lot of features. I found the ones that are there to be straightforward but still offer enough of an impact on the gameplay to potentially create some surprises. Just don’t expect anything that you’ve never seen before.

The base game is a rather simple affair. Even the Wilds you’ll encounter in the game aren’t very common, since there are no single tile Wilds. Instead, the Wilds can be any of the high-paying symbols as long as they appear stacked on 2 touching reels. When that happens, the symbols change into a Colossal Wild and act accordingly.

Although this sounds rather difficult to activate, it was actually more common than you’d think. I would say you’ll see one every fifty or so spins. When it shows up, its effectiveness is debatable. It can appear on reels 1 and 2 just as likely as it’ll show up on reels 5 and 6.

The Colossal Wilds mechanic is also active during the base game, where it has some other changes to the gameplay. Activating the Free Spins mode simply requires 3 bonus symbols on the screen. Once the bonus game starts, it’s not possible to win additional spins.

During the Free Spins mode, the low-paying symbols are absent. Instead, the player is only playing with the high-paying symbols. This obviously makes it more likely to get a natural win, but it also makes activating the Colossal Wilds feature a real possibility.

In my experience, the Free Spins mode is a nice way to get your funds back up. In a few isolated cases, this mode can trigger big wins but this is not something you should count on. Don’t assume that hitting the Free Spins mode will instantly put you in the positive so keep an eye on your funds.

24 Hour Grand Prix has an appealing setting but unfortunately fails to capitalise on it. There aren’t a lot of racing animations, the symbols are rather bland and the feeling of participating in a race isn’t there.

There are only 2 features to speak of and even though they work well together in the Free Spins mode, it leaves the game rather lacking during the base game. Players will try to get into the bonus rounds and lose focus on the main game, which is where they’ll spend most of the time.

Browse casinos with 24 Hour Grand Prix and other slots from Red Tiger. Create an account and try the game for free before making a deposit.

You can play 24 Hour Grand Prix in English, Finnish, Swedish, German and 17 other languages. 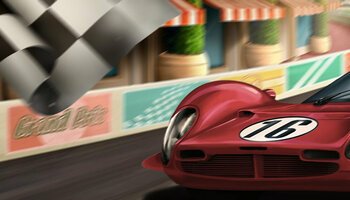