3 Clown Monty is a slot that brings a certain element of crime to the usually happy world of clowning and the circus. This slot has some great art and entertains players through multiplier wilds, free spins and some interesting characters.

Originally developed and released in 2021 by Play ‘n GO, this game has a great style that immediately makes people uncomfortable. I was pretty certain it would be a rather creepy slot from just the opening image, and the art within the game shows that we’re watching a group of people that most likely only pretend they’re clowns. When they appear on the 5-reel, 3-row playing field we can tell they have their best days behind them.

There are only 10 paylines on the playing field which makes it somewhat more difficult to get a win. The main reason that’s unfortunate is because wins trigger some fun animations. All of the high-paying symbols are different unique characters or objects that move when part of a win. The low-paying symbols are only card suits which are still made to look somewhat fitting the theme.

Obviously, a slot at a circus would include circus music and it’s no different here. The music does sound somewhat soft and tinny but it emphasises that this is a dingy circus where they don’t have money for the high-quality stuff. As far as the sound effects go, we can hear the audience applaud when there’s a win as well as various other effects we would place at a circus.

3 Clown Monty uses hand-drawn art as a way of filling the reels. There’s little to see when it comes to the background, only making it appear as if we’re looking at the back of a van. The characters all look realistic with distinct personality. One of them seems depressed, another is angry and the third is scheming. That’s not even mentioning the cigar-smoking gorilla!

With the low number of paylines, I did find it somewhat hard to get a win, with symbols appearing in places where you would normally receive a win but now nothing happens. As a result, the slot has High Volatility. I found that it made winning quite hard and even when I did win it was often not enough to really compensate for my losses up to that point.

Players are able to adjust their bets as normal, with the game offering the choice for a bet between £0.10 and £100 per spin. There is also a jackpot for those few players that manage to hit the game just right. This will award them a very respectable 20,000x your bet which can quickly become a big number. Still, it’s important to keep in mind it’s unlikely for any player to hit that jackpot.

3 Clown Monty has a few different features that can work together or independently. I thought that they are mostly pretty obvious. There are some small tweaks to the way they work that weren’t explained in the game so I had to look at the paytable for that.

The features that are in the game include:

I was rather pleased with how the features were integrated into the slot. They appear often enough to feel like they’re part of the game. The way the player is engaged by picking between 3 cards also made me feel like a more active participant. The game never really feels like it can play itself and the player is expected to keep paying attention.

The special features activated often enough to make them an interesting part of the game. It also felt necessary since the low number of paylines made regular wins quite rare. The features are needed for the player to get wins that are big enough to compensate for that. In my experience, that did happen and I ended up with a tiny profit.

3 Clown Monty is a fun, interesting slot that mostly offers something for players that are looking for a graphically impressive game. There is a lot of storytelling buried in the presentation of the game and players will be able to construct what is happening in their own heads. The art that is used as well as the sound design really helps elevate the game.

The features are fun if not very original but the way they are presented and combined do offer some unique gameplay mechanics. Having 2 Scatters next to each other trigger a coin flip between extra wilds or activating the free spins mode was a nice addition.

Players that enjoy high volatility games will do well checking this game out. I felt that it would swing between winning and losing quite heavily, but there was always an opportunity to end up on top.

Browse casinos with 3 Clown Monty and other slots from Play'n GO. Create an account and try the game for free before making a deposit.

You can play 3 Clown Monty in English, Finnish, Swedish, German and 30 other languages. 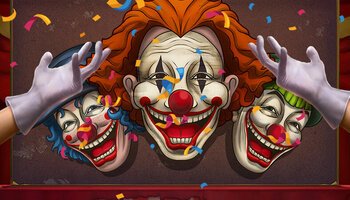