4SQUAD takes the concept of superheroes and creates its own team of enhanced humans that strive to protect the world from various threats. In this slot, players can find cascading reels, multipliers and non-standard reels to play on.

Originally developed and released by Red Tiger in 2020, 4Squad is the studio’s first attempt at creating their own superhero team. With a massive 7x6 playing field there is a lot to see. The sot doesn’t use original paylines but instead using cluster wins to establish wins. This is further modified by the cascading reels, where winning symbols drop away and are replaced.

All in all, this slot is not for people that prefer classic games. The gameplay isn’t unique either, there are plenty of games with this type of playstyle, but it is a far cry from the normal rows and reels. Luckily, the game looks great with a series of special characters that represent the heroes. Meanwhile, the playing field is further filled with familiar card suits.

I thought it looked great with the city background as well as the occasional hero art that appeared on screen when a special feature was triggered. In terms of sound design, there was also clearly time and effort put into establishing a mood and atmosphere. We hear the familiar tense music we have heard in superhero movies as the symbols drop down, amplified whenever one of the heroes is activated.

The symbols in 4Squad are mostly based around the characters themselves, reinforced by card suits in a stylized shape. The symbols don’t have any animations when part of a win but they do explode and drop away, making room for new ones. This is part of the cascading reels feature. I did feel like the symbols were rather small. A lot of the slot’s available space is used for the static background image while I think they could have made the playing field a little larger.

The symbols that you’ll find in 4SQUAD are:

4SQUAD has a number of features, most of them associated with a specific hero in the game. There is a tracker at the top of the slot for each of the 4 heroes, each with 8 spaced. Whenever a cluster involves one of the heroes, it fills up the tracker. Filling up any tracker will trigger their associated feature.

The features in this slot are usually metered out by having the trackers fill up at different speeds. It only happens occasionally where all of them are filled up at the same time. When that does happen, the Superhero Mode offers the player the opportunity to get a big win since all the features activate at the same time.

I found that the game’s high volatility does mean that it hinges on how often you can activate Superhero Mode. When I played this game for the first time, I didn’t manage to hit this mode once and as a result, my funds plummeted pretty quickly. In contrast, the second time I played it the slot was a bit more lenient and I activated the Superhero Mode a few times, resulting in a nice profit.

The game lists itself as having Medium Volatility but in my experience that didn’t quite fit. The payouts for even very large clusters are rather small and considering the style of play, it's not possible to get multiple big wins at the same time. The wins do happen quite often but they also pay out too little to make back more than a few spins at a time.

Out of the 4 basic features, I found the Quake feature to be the most productive since it removes half of the symbols and makes it more likely that clusters are created. On the other hand, the Beam creates a multiplier to the next win but this is often disappointing because wins are small.

4SQUAD has a non-standard playing field that will make it clear to players that it is not a classic slot. Players who are looking for that won’t find it here. If you are a fan of a different style of play, or if you’re curious about it, 4SQUAD is an okay entry for this type of game.

The game does look good, although I found the symbols to be rather small and therefore it’s difficult to see the details. It feels a bit like wasted effort. There also aren’t a lot of animations that play during the game, with only an occasional larger image filling the screen when one of the bars is filled.

Overall, I think 4SQUAD is a fine but rather average slot that does change up the standard gameplay but then doesn’t do anything new. There are plenty of other slots with non-standard reels and cascading reels that offer a bit more engagement in my eyes.

Browse casinos with 4SQUAD and other slots from Red Tiger. Create an account and try the game for free before making a deposit.

You can play 4SQUAD in English, Finnish, Swedish, German and 18 other languages. 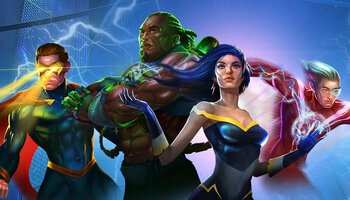