5 Families details the woes of a series of crime families that are embroidered in a deadly game of illegal business and war. Players are introduced to the most notable figures as well as dealing with a bonus game, multipliers and a modest number of paylines.

This slot was released in 2020 as part of the Red Tiger lineup and shows us the inner workings of the mafia as they engaged in backroom dealings and illicit trades. The game is filled with all sorts of characters and items that remind us of the classic ideas most of us have of the mob, and many of these symbols are animated. There is a 5-reel, 3-row playing field to play on with a modest 10 paylines.

If you’re a fan of mobster movies, you’ll likely enjoy the setting and theme of the game. The developers clearly put a lot of attention into the design of the game, with the background showing different scenes such as a poker game in a smoke room. The symbols are all original, some of them depicting classic mafia stereotypes and others showing us items we would associate with organised crime.

Even the sound design is made to fit the setting, with a laid back jazz song playing in the background as if we’re at a high-class joint. The sound effects are kept relatively simple but also fit the theme well, including a spinning cylinder when spinning the reels or the sounds of a cash register when there’s a win.

All of the symbols you’ll find in 5 Families are originally created for the game, drawing from the immense amount of information and media about this particular topic. The characters all have their own personality, as well as unique animations and a quick voice line when they’re part of a win. Getting a win lights up the payline and shows you the total amount won.

The symbols include, from highest to lowest:

There aren’t a lot of different symbols but coupled with the small number of paylines the game still lands on Low Volatility. You’ll be treated to wins quite regularly but they usually won’t be very much and you’ll depend on the special feature to trigger any big wins.

Players can pick a bet between £0.10 and £100 per spin if they are looking for a bit more or a little less excitement. The jackpot is a perfectly acceptable 1,000x your bet.

5 Families doesn’t have too many features but that doesn’t make it a boring game. The features that are included are easy to understand but I did find them rather impactful in how the game played, and especially in how it helped create wins.

To start with, a quick summary of the features:

The normal gameplay for 5 Families is very simple, with no additional features to be found. There aren’t even Wilds included in the game. The main goal for the player is to get 5 wins in a row, as this will trigger the Bonus Game. The tracker is the chamber of a revolver that is loaded with bullets.

Once the revolver is loaded, or in other words, once the player has 5 wins in a row, the bonus game starts. During this part of the game, the background changes to a poker game and a 5x multiplier is activated that lasts the entire bonus game.

The bonus game spins as normal, requiring coins to bet just like in the regular game. However, if the player manages to get a win within 5 spins, this counter resets. As long as the player gets at least 1 win in every 5 spins, the bonus game will continue.

In my experience, this can lead to some big wins where you can easily win back dozens of times your bet. The bonus game can also last quite a while as the low volatility means that wins are quite easy to come by. Getting any win also has the 5x multiplier applied to them, granting players even more coins.

5 Families is a fun slot with its inspiration taken from the classic mobster movies. There isn’t a lot of violence in the game, focusing more on the cool aspects of the setting with dangerous men playing cards and looking menacing. The animations help bring them to life somewhat, but the game is generally rather static.

The gameplay is very much focused around getting the 5 consecutive wins and activating the bonus game. This wasn’t very easy in my experience, but it did help the player a lot once it did happen. It is no guarantee for any big wins, but I found it to be favouring them anyway.

If you’re looking for a standard slot with only one feature but one that will help you get some big wins, 5 Families might be the right choice for you. I wasn’t too enamoured with the simplicity of the gameplay but I can’t say I didn’t enjoy the bonus game and its results.

Browse casinos with 5 families and other slots from Red Tiger. Create an account and try the game for free before making a deposit.

You can play 5 families in English, Finnish, Swedish, German and 17 other languages. 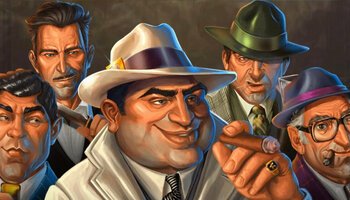