7 Piggies is set at a farm where a group of bovines are living, acting as a family with its own quirks and personalities. The slot also features free spins, wilds and multipliers for players to enjoy as they watch this family go about their business.

The game was developed by Pragmatic Play and came out in 2017, although the graphics have held up amazingly well. There is obviously a strong emphasis on the cartoony premise which is expressed through the appearance of the pigs which all have their own character. The 5-reel, 3-row playing field gives ample room for each pig to be portrayed.

All of them look different, with their own colours and unique characteristics. We only see their heads, which also helps in setting a mood. If there’s a win on one of the 7 paylines, each of the symbols also has its own animation. In the background, we can see the farm they live on. Although the image is largely static we do see a windmill turning in the wind, and when the free spins mode is activated day turns into night.

As far as the sound effects go, it hammers down on the country vibe with a decidedly country song. There’s no singing involved but we can hear the bluegrass inspiration clearly. The sound-effects stay on the same vibe, keeping things light and simple without disrupting the theme.

7 Piggies obviously implies that there are 7 pigs in the game, but there are in fact only 6 symbols in the entire game, each of them depicting another pig. Since the only occurrence of the number 7 is in the number of paylines the game has, I am forced to assume that’s what the game draws its name from. Either way, the game has a very limited number of different symbols.

Unfortunately, that does nothing to help increase the possibility of getting a win. In fact, it feels almost impossible. That also explains its High Volatility, as I regularly had dozens of spins without a win. Even when one does get a win, there is no guarantee you’ll even make your winning spin back.

As a result, players should start off with a low bet and only increase when they get a feel for the win rate. The game allows this, of course, letting you pick a bet between £0.07 and £70 per spin. To compensate for the volatility the game has a theoretical max. win of 39,000x your bet but don’t hold your breath on getting it!

The symbols in the game are from highest to lowest:

7 Piggies keeps things rather light when it comes to the different features that are included in this slot. The features will be familiar to everyone and there is little to explain when it comes to their functionality, as they operate much like they would in any other classic video slot.

Getting into the slot is very easy. Just start spinning and watch how the symbols appear on the screen. Most of the time, a reel will be filled with one symbol. This makes it hard to get a win, but it is likelier that you will get multiple winning payouts at the same time if the right symbol appears on the right reels.

The free spins were difficult to trigger but once I activated it, it did offer me some acceptable wins. Nonetheless, it felt like my funds were constantly dropping and I never really had an opportunity to make up for it. As the free spins mode does not change the general gameplay, players do not have a better opportunity at winning in this part of the game as they do in the base game.

7 Piggies is a very simple slot. The graphics are well-done and have some character to them but they feel underdeveloped and as a result, don’t really make it stand out. I liked the soundtrack a lot more, but it was also not impactful enough to stick in my mind.

The features are extremely simple but they do their job well. The Wilds don’t show up often enough to help with a win but when they do it can help. Playing the game is mostly waiting for the free spins mode to activate, which doesn’t happen often.

Browse casinos with 7 Piggies™ and other slots from Pragmatic Play. Create an account and try the game for free before making a deposit.

You can play 7 Piggies™ in English, Finnish, Swedish, German and 17 other languages. 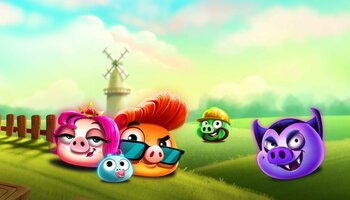