Simple, fast and fun. That is what 888 Dragons is made of. This is a bare-bones slot, so don’t expect anything fancy.

Pragmatic Play is a developer with a large catalogue of games. They are evolved and improved over the years, but they still have a tendency to publish filler slots. 888 Dragons is one of those and it fills a strange role.

First of all, the game was released in the summer of 2017, but it feels a lot older. I mean, it could have been released a decade earlier and I wouldn’t have second-guessed it. The other strange this is that this slot has all the extras stripped off. This is as simple as a slot can be and there aren’t many games like this in the world.

888 Dragons lays its cards outright from the start. When you open the game up, you see everything it has to offer. Nothing is hidden or awaits unlocking. No, it’s all right there.

The game has three reels, a single payline and the paytable is right there on the screen. Every single aspect of this game can fit in one screen.

The theme of the game is Chinese dragons, and of course, we get the traditional Chinese-styled visuals. Golden frames on every box and a deep red colour in the backdrops. We’ve seen this a thousand times and I’m sure you already guessed what the game would look like when you heard the name.

Looking boring is one thing, but sounding horrible is another. The game has no real music and the only thing close to it is the noisy jingling sound when the reels spin. It’s that same sound that an older fruit machine would make. Now, this would be fine if this was a proper retro-styled slot, or at least when the slot wasn’t this fast. The “music” starts and stops with the reels and when you play at the speed of two spins a second, you can just imagine how bad that sounds.

In a way, I’m impressed how much Pragmatic was able to strip away from a slot and still keep it playable. I just wish that what was left was of better quality. Make the same slot with modern visuals and better music and you would have a much better game.

If you play Pragmatic Play’s slots, you might recognize the symbols. The figure-eight-shaped dragon is the same symbol as the giant wild in 8 Dragons. Here, that symbol is the only one you get.

888 Dragons has only a single symbol in three different colours. The Red Dragon is worth the most, green is in the middle and blue is worth the least.

The game has a single payline and you win if you get three dragons on that line. It doesn’t even matter which dragons you get, just as long as they are on the line. This slot has that annoying feature, where the reel can stop in the empty space between two symbols.

The paytable is extremely simple and it is always visible on the left side of the screen. There are four ways you can win:

The game may seem too simple to you right now, but that is actually a good thing. The slot is very easy to predict and optimise. The slot has an RTP of 96.84% and medium volatility. As the game has no special modes or bonuses, those stats only affect the base game. Combine this information with the possibility of a tiny wager and fast gameplay, you get a slot that is great for filling wagering requirements.

You can play this game for a long time with just a tiny bankroll. It is hard to win big, but easy to win small. And here even the smallest win is worth five new spins. That is the reason why this slot can be worth your time.

Some slots are painfully slow to play, as the spins just take so long. This is not an issue with 888 Dragons. 888 Dragons has a Fast Play mode, which is a common feature in slots. But what is not that common, is the Turbo Play feature. Play with Turbo on and you can play roughly two spins a second.

888 Dragons is a strange game. There aren’t many games like this, so in a sense, there isn’t much you can compare it to. That is the biggest selling point for me.

What bugs me the most is the appearance. We have seen Chinese-themed slots a million time and this one isn’t even that good-looking. It doesn’t stand out and it leaves no impact. You can’t even say much about the sounds, as most of the players will quickly mute the game.

Now the game isn’t all bad. To me, the greatest feature of it is the low wagers and predictable gameplay. If a slot doesn’t have special features, it’s fairly simple to see how the game will play out. You can look at the RTP, the volatility and the pay structure and see that these stats will only affect a single gameplay element: the base game.

The question that I keep asking myself now is, will I play this game again? The answer is probably no. If the game looked and sounded better, then I might pop back in. But as the game is now, I just don’t enjoy it enough. The gameplay is good, but it doesn’t outweigh the weaknesses.

Browse casinos with 888 Dragons™ and other slots from Pragmatic Play. Create an account and try the game for free before making a deposit.

You can play 888 Dragons™ in English, Finnish, Swedish, German and 17 other languages. 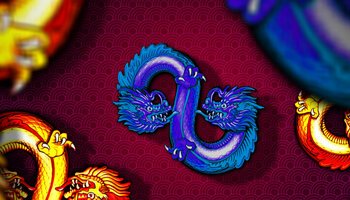 If you are looking for a simple old-school experience, then this is it. 888 Dragons is fairly unimaginative but it sure is easy to play. The lack of special features is sure to drive people away in the long run, but at least the game is predictable.

I like this game, helps build your money back up ready to play on other games 👍