90k Yeti Gigablox takes us up the mountain where we will have to deal with the mythical creature that has been stalking these lands for centuries. In this game, we also have to deal with gigablox, walking wilds and free spins.

This game was developed and released by 4theplayer.com in 2021, a relatively small studio that nonetheless has been hard at work making a name for itself. The game does a good job at showing off their abilities. Everything looks great, with the 6-reel, 6-row playing field taking up most of the screen. Around the screen, we can see the Yeti himself as well as the harsh mountainous area where it lives.

There are a lot of moving parts in the game, with the Yeti being the best example. He can be seen standing and breathing as the reels spin. Occasionally he will interact with the playing field, blowing on it to make the symbols shuffle themselves. The symbols themselves are also more or less animated. Meanwhile, we can see flags blowing in the icy wind and snowfall from the sky.

Players can get a win on one of the 46,656 paylines the game features. There are often a number of empty symbols on the screen that don’t contribute to any win lines. This is likely done to increase the volatility. These symbols just look like packed snow.

90k Yeti Gigablox has a number of different symbols, divided into the usual groupings of low- and high-paying. The low-paying symbols are based on the familiar card letters which unfortunately doesn’t really fit the setting. In contrast, the high-paying symbols are different characters. People who are climbing the mountain are chased by the yeti. Other symbols represent the tools people use to climb.

The game comes listed as High Volatility, making it quite difficult to get a win even with the many paylines. The RTP of 95.5% reflects this as well as it is low compared to the average slots. Don’t expect to get many big wins, and even when you do they are unlikely to be enough to compensate your losses. I had a lot of trouble even keeping my funds stable and they kept dropping almost inevitably.

Players get to change their bets somewhat as they play, picking them between £0.09 and £10 per spin. That might seem like a limited range but considering the volatility, it’s probably best that players aren’t able to spend more per spin. Even so, the maximum win of 90,000x your bet will still be a nice payoff even when not using the highest bet. I think players should keep in mind that this is very unlikely to hit.

The following symbols can be found in the game:

90K Yeti Gigablox doesn’t have an enormous number of features but the ones it does feel pretty transformative. This means that each of the features has quite a big impact on the gameplay. For starters, a quick look at the features we can find in the game:

Something that also impacts the gameplay heavily but isn’t a feature is the number of empty blocks that appear on the screen. These look like packed snow and have no value, do not count towards any wins and will make it harder to get wins. You can see this by keeping an eye on the counter at the top right of the screen. This will change every spin even though the size of the playing field doesn’t change.

In a way, I found this to be how the Megaways functionality works but as a photo negative. Instead of a reel having more or fewer symbols on it, this game will add more or less empty blocks to it. Wins are still calculated by consecutive reels which means that these empty blocks don’t sabotage possible wins, they just make it harder to get new ones.

Overall, I thought the features were pretty solid. As I mentioned before there aren’t that many but especially the Gigablox feel like they can heavily impact the gameplay. Unfortunately, without these, it becomes quite hard to get substantial wins.

90K Yeti Gigablox is a fun sequel to the original Yeti slot. It does a lot of things differently while doing quite a good job at holding onto the ideas that made the first game a joy to play. Players will likely get a kick out of seeing the different animations. Everything looks stunning with a lot of attention to detail.

The game has some features that I wasn’t quite sure of. They aren’t necessarily bad or annoying but they do feel like they make winning very hard. Players will likely need to play a long time and take great care not to simply lose all their funds.

If you don’t mind a number of different features that stray away from the classic slot idea you will probably enjoy this slot. Players that prefer to go for the standard games with as little fanfare as possible might want to skip this.

Browse casinos with 90K Yeti Gigablox and other slots from 4theplayer.com. Create an account and try the game for free before making a deposit.

You can play 90K Yeti Gigablox in English, Finnish, Swedish, German and 21 other languages. 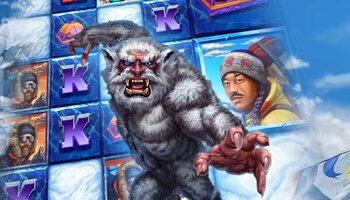