Considering the sheer size of the maximum payout of 9K Yeti, it may be that “Yeti” stands for “jackpot” in the sense that “whale” means something capital. Or, who knows, maybe it’s about an encounter with the abominable snowman.

Regardless of the motive, I like the title and I like the Yeti phenomenon. I remember reading a book about a Himalayan pilgrimage when I had to keep my jaw from dropping after encountering a true Yeti story.

At any rate, 9K Yeti reminds me of so many things that I find fascinating. The game itself is quite enjoyable. It comes from 4thePlayer, a relatively new provider that I think made its presence known in the world of online slots because of it.

The layout of four rows and six reels spins across 4,096 ways to win. I give the game a high mark for being a highly volatile slot that has an RTP value of 97.00% and gameplay that sticks together with the help of a potentially-massive free spins bonus. If you are wondering what 9K stands for, you probably got it right - it’s the maximum win potential of 9,000x your bet.

The premise of the game puts you on an expedition to the Himalayan mountains. Mount Everest to be precise. Along the way, you are going to be in the company of a climber, porter, tent, mountain summit, climbing gear, the royal cards and a Yeti.

The latter is the most valuable symbol of the game and the liveliest of them all. I was glad to see it land at a rather high frequency during the free spins. In fact, the Yeti makes the game and you will soon understand why.

Is the game visually stimulating? I think so. Even though none of the symbols (except the Yeti) are animated, few visual effects can raise the level of excitement, especially during the free spins bonus.

Sound-wise, 4thePlayer’s audiophiles have created a masterful ambience that combines the sensation of existing in a windy, thin-air environment with the spectacular calm of a Buddhist string instrument and bells.

Top marks from me for the design. Hands down. 9K Yeti is one of the most original themes I’ve seen in a while.

The base game is rather straightforward. It lacks reel modifiers or similar extras, but close-calls do get the benefit of a doubt with the help of a Wild symbol. The Wild plays a crucial part in the free spins bonus, so the more you see of it, the better.

This is the only bonus of the game. I like how 4thePlayer has kept it simple, yet exciting at the same time. The reason for that is the fact that you can win up to 880 free spins. It's in the "books". 9K Yeti can award up to 50 free spins if you get six scatter symbols while the free spins bonus is unfolding.

The scatter symbol is represented by an image of Yeti footprints. Landing three, four, five or six scatters can trigger 8, 15, 40 and 88 spins in that order. That's more than generous in my opinion. I know that getting five scatters is a rare thing, but it just happens so that a high variance slot game may "decide" to defeat the odds and grant it.

With a maximum payout potential of 9,000x your bet, the game got me thinking about what succession of features must come to the fore to get you there. The answer is, a free spins retriggering frenzy repeating for as many as 880 times. Since that kind of potential exists, I keep 9K Yeti on my favourites list and get on the game periodically to test my high altitude survival skills.

Any non-winning outcome that includes a Yeti symbol and a Wild, anywhere on the reels, results in a reshuffling of the symbols by a storm. The result is a guaranteed win in addition to a cool visual effect.

This is the only reel modifier this game ever needed. The mathematical model appears to favour the Yeti symbol, regardless of it being the most valuable symbol. In my experience, there hasn't been a free spins bonus without at least one Snowstorm feature.

Yet another inclination of the game is to build stacks of three and sometimes four Yeti symbols. This considered, the game definitely deserves the title 9K Yeti.

I prefer online slot games that have this option because I like to change my bets by small increments based on what I am getting from the game and according to gut feeling.

The paytable structure is quite typical for games with six reels that run on a ways to win, adjacent reels system of payouts.

Three or four low-paying symbols of the same kind aren't going to make a full return on your bet. On the other hand, the three highest-paying symbols can pay for two of a kind and the payouts are decent.

I don't think the paytable structure is weak. There are actually some good amounts on it, but you need more than three symbols to bank on them.

All this goes to say that you can win decent amounts in the base game, but in reality, it is a preparation for the free spins bonus.

I couldn't find any fault with the game. It has character, an edge (97% RTP), high volatility and doesn't pull cheap tricks on you such as barring the Wild from the first reel.

No surprise, you can find 9K Yeti in most of the good online casinos out there. I can highly recommend it but with a couple of caveats: base game can lapse into rough patches and this may be a turn-off for some players due to the lack of reel modifiers.

Nevertheless, a 10p spin for the lowest bet ought to warrant checking out the 9K Yeti if not outright delving in it.

Browse casinos with 9k Yeti and other slots from 4theplayer.com. Create an account and try the game for free before making a deposit.

You can play 9k Yeti in English, Finnish, Swedish, German and 21 other languages. 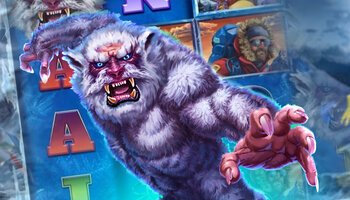