A Night in Paris slot review

Play A Night in Paris

A Night In Paris is an older Betsoft slot that brings us into the most romantic city as night falls, where we follow both a criminal and a cop as they have a duel of wits. The slot further features free spins, a bonus game and a progressive jackpot.

Released back in 2011, this slot is built around graphics that have slowly started looking quite dated. They do fit the theme quite well, being based around the cop and criminal characters as well as sights you might see in Paris. Unfortunately, the symbols aren’t animated at all but that is compensated by the short animations that play whenever the bonus game is activated.

This game has a 5-reel, 3-row playing field that gives it room for its 30 paylines. These paylines are enough to help boost the slot to Medium Volatility. In my experience, players can expect to get a win occasionally and have the free spins mode or bonus game to help actually win something above the starting point. Obviously, this is not guaranteed so you should keep a close eye on your funds.

When it comes to theme, the game makes it clear we’re in Paris and that we’re following both sides of the law as it centres around the Louvre and the priceless art within. Although they are used as symbols in the base game, it’s not until we get to the bonus game where we see the actual heist and the player gets involved.

A Night In Paris obviously borrows heavily from people’s preconceptions about this city. Expect symbols that represent doves, croissants and the Eiffel Tower. The main characters are the police officer and the thief, who also come back in various other parts of the game. If you would like to see them move around, make sure to activate the bonus game. Something that I’ve noticed with Betsoft slots is that they rarely use card suits or card letter symbols. Instead, they prefer to create unique symbols that fit the setting, increasing immersion.

Although the game has medium volatility and was pretty lenient in handing out wins when I played it, people might still want to adjust their bets. This might be a good idea if you have limited funds, or on the contrary when you’re looking for bigger wins. The game lets you choose a bet between £0.02 and £150 per spin, giving every player the perfect size bet.

When it comes to the maximum win, there are a few options. First, there is the progressive jackpot that increases over time. This can be a sizable win on its own, but it’s not the biggest in the game. That honour goes to the max. win of 954,000x your bet but it is obviously extremely rare and really only a technical possibility more than any plausible opportunity. If a player could ever really win this it’d be one of the biggest wins in slot history.

A Night In Paris doesn’t use only special symbols to activate the features in the game, but will also accept various normal symbols in a specific number or location.

As I played the game I found it to be very hard to activate any of the features except for the Bonus Game. That one was still difficult to activate but it was easier than the others. The jackpot is something that’s completely out of reach for anyone who isn’t playing the maximum bet, which makes it a high roller feature only.

Meanwhile, the free spins mode can only be activated when there are 3 Shield symbols on the screen. During my time playing, the most I saw was 2 at the same time so I absolutely believe it’s doable but it’s clearly not easy. I also couldn’t find any information about special features that were active during this mode, likely not helping much in getting big wins.

If you’re looking for a slot with a large number of features, I don’t think this game is it. Even though there are arguably 4 different special modes, there is only 1 that will actually activate during a regular game session. Keep that in mind if you’re someone who doesn’t mind certain volatility as long as they get the opportunity to win it back in a special mode, as this game will only offer that very rarely.

I do have to say that the bonus game offers some excellent animations, displaying how the Thief sneaks into the museum. He then either makes off with his treasure or gets caught by the Cop.

A Night In Paris is an older slot that has dated considerably when only looking at the graphics. On the other hand, I feel like the designers put more care and attention into its design than is common nowadays. The 3D graphics didn’t age very well but there are still some very entertaining animations present in the game.

The features are probably one of the weaker parts of the game, not in how they work but in how difficult it is to activate them. Players will likely need to play for a very long time to see all of them, including having to increase their bets to have a shot at the jackpot.

If you’re looking for a relaxing slot that will only sometimes boost your winnings with a special feature then this game might be a perfect fit. Players that like to have a varied gameplay experience with regularly activated features might want to look elsewhere.

Play A Night in Paris for free

Browse casinos with A Night in Paris and other slots from Betsoft. Create an account and try the game for free before making a deposit.

You can play A Night in Paris in English, Finnish, Swedish, German and 22 other languages. 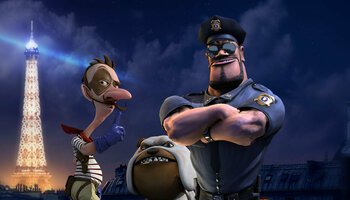