ABBY AND THE WITCH slot review

The evil witch Baba Ranga has drained all the world out of colours! Now with everything just black and white, you need to help Abby to come up with a counter-spell and make the world colourful again.

Abby and the Evil Witch is a slot game made by Zeus Play in 2020. In the game, a pigtailed girl called Abby is trying to fight the evil witch and her magic. Because of the witch, everything is now black and white. Only winning and managing to get to the Bonus Spins can help the colours briefly returning.

Before this one, I hadn’t played any of the games by Zeus Play. I studied them a bit and despite them having produced games since 2011, I had never heard of them. I wondered why, but after checking out their selection of slots I came to a conclusion that they just haven’t had enough building blocks to get noticed. It’s very easy for smaller game suppliers to be left in the shadow of some of the greater ones. And more so, if the games look cheaply made.

Sadly, this seems to be the case with most of Zeus Play’s games. But, they do have potential with Abby and the Witch. However, as a low volatile slot with an RTP that could be better and a low maximum win, it’s no wonder this one probably will not attract much attention.

Abby and the Witch has a bit controversial graphics. On the other hand, I love the background. It’s very simple, yet stylish in the all black and white. The first thing that came to my mind was some older Tim Burton’s stop-motion animation. But, then there’s the Witch and the usage of colours. The Witch looks like the artist went nuts with their airbrush and, basically, the Witch is like a character from a 90s comic book.

I think they could’ve done so much better. I know the story behind the slot is to get back the colours the Witch has stolen, but in my opinion, the slot could look nicer without the whole Abby-part. Some of the symbols are slightly animated, but clearly, the Witch is the thing where Zeus Play put their money in. Again, I would’ve ditched the story for the better big picture here.

The music in the game is your basic ambient music from old horror movies. Sometimes you can hear a crow, a disembodied woman singing without lyrics and a wind blowing in the trees. However, the track is fairly short and abruptly starts again, making it too distracting to listen for a long period of time.

Abby and the Witch has five reels, three rows and 10 fixed paylines paying from both sides.

The Witch is a Wild and substitutes all other symbols in the game. In the base game, it only appears on reels 2, 3 and 4. Landing three Witches awards you with a round of Bonus Spins.

During the free spins, the Witch grows to a stacked Wild and covers fully the third reel. It’s also a sticky Wild, so it stays visible for the entire time.

The Witch also may, at any spin, change up to 12 symbols into Wilds. You can randomly get few more Bonus spins, but you can’t re-trigger the Bonus Spins feature.

I’m aware that my history of mainly playing the games from big providers (NetEnt, Play ‘n GO, Yggdrasil etc.) will definitely affect how I’m seeing the smaller providers’ games. And seeing how Abby and the Witch looks like it’s a game from at least 5 or more years ago, I can’t but feel sad for it.

I quickly got frustrated when I noticed there was no way to speed up the game showing the winning lines. The reels already spin slowly, so as a player who values her time, this is one of my pet peeves in slots - not being able to play quickly and being forced to watch the animations.

In conclusion, Abby and the Witch is a cute slot but sadly, cuteness shouldn’t be the best quality of any slot game. But, if you want to try something different, it’s not a bad choice per se. It’s just doesn’t have what it takes to compete on the same level as more known publishers’ games.

You can play ABBY AND THE WITCH in English

ABBY AND THE WITCH supports GBP, EUR, SEK, NOK and 42 other currencies. 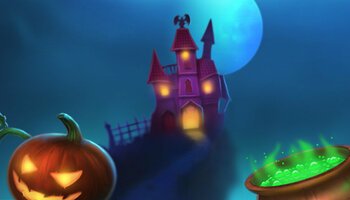