Ace of Spades brings back the classic fruit machine, this time to the video screen. All the usual elements are here, from the single pay line to the standard sound-effects.

This slot is already a good few years old, released in 2012 by developer Play ‘n GO. The graphics are almost non-existent because of the age and the source material. Making a digital version of a classic fruit machine simply leaves little room for a lot of graphical elements. The game does look like what you would expect.

The game has a paytable right next to the 3-reel, 1-row playing field. The 1 payline is always shown as a straight line across the reels. The different symbols are nothing unique but they look acceptable with their slight 3D effect. Getting a win triggers a brief blinking animation as well as the relevant payout lighting up on the paytable.

When it comes to the music, Ace of Spades also sticks close to the source. There is no music playing in the background as the reels spin, only playing the realistic effect of mechanics clicking as the reels come to a halt. Only when there’s a win does it trigger a quick jingle.

Since it’s a fruit machine the game doesn’t have a lot of symbols, with a select number of possible wins. There are combinations possible between different symbols as well. Another element taken from real fruit machines is that spins don’t always end up on the payline, not granting any wins. Because of these reasons the slot has a Medium Volatility.

Since the game is so simple it won’t take players a lot of time to get accustomed to the slot. There are also little options to augment the gameplay. The one thing players can do is to change the bet per spin between £0.01 and £75 per spin.

As the game is a classic fruit machine, the features on it are minimal and only have a slight impact on the game.

The Ace of Spades are not just the inspiration for the slot but they also act as Wilds in the game. Whenever they’re part of the pay line, they also add a multiplier. Getting 3 Ace of Spades will trigger the jackpot, up to a max. win of 2,500x your bet.

Other than that there isn’t much to tell about the game. As with any fruit machine, the biggest frustration is when the symbols don’t stop on the payline. I would say that about half of all spins are invalidated because they leave gaps on the line.

Ace of Spades is an almost decade-old video slot recreation of an even older game concept. The fruit machine is the most standard slot which leaves very little room for any developer to make anything unique or memorable out of it while staying true to the spirit of the game.

Play ‘n GO gave it their best try, using original sounds, reducing the number of symbols and generally sticking close to the type of game many of us know and love. It also means there is little to differentiate itself from other fruit machine adaptations.

There are a few features that slightly augment the experience but they don’t occur often enough to really feel important. At the same time, the game feels like a real fruit machine so I suppose that’s what players are really looking for.

If you’re a fan of classic fruit machines you’ll already know this is the game for you. If you are looking for anything even slightly more modern, there are thousands of regular video slots for you to look at!

Play Ace of Spades for free

Browse casinos with Ace of Spades and other slots from Play'n GO. Create an account and try the game for free before making a deposit.

You can play Ace of Spades in English, Finnish, Swedish, German and 30 other languages. 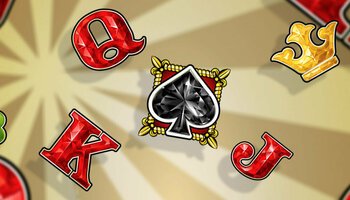