Ace Round takes the concept of a popular shooting game and transforms it into an action-packed slot filled with guns, explosions and walking wilds.

This game is based on the popular online shooter Counter-Strike, even using a logo that’s very similar to that game. There are also a lot of smaller details that people familiar with the computer game will recognize. The different weapons are present in the game, the background shows one of the most popular maps and the characters in the slot are also modelled after those from the game.

Developed by Evoplay Entertainment and released in 2017, the developers themselves admit it is based on this popular franchise even though it doesn’t look like they have the official license. I still found it very enjoyable to play though, and the graphics did remind me a lot of the original game. The slot comes with a standard 5-reel, 3-row playing field and a modest 20 paylines.

All the symbols in the game are animated appropriately when part of a win. The guns shoot, the grenade explodes and the characters move. The art itself is also highly detailed and as I mentioned before fits the style from the video game. If you’re the type of player that looks for beautiful slots I would definitely recommend Ace Round.

All the symbols in the slot are original, created to fit the theme as well as being easily distinguishable. The high-paying items, not the guns, also have an orange background to make them even easier to tell apart from the other symbols. Even though there is a rather big assortment of different symbols the game comes with a Low Volatility.

The game has a bunch of features that interact with each other in interesting ways so I’ll try and keep things clear as they go over them.

The general features are:

There are no regular wilds during Ace Round but there are different wilds that appear at different points in the game. The S.W.A.T. and Terrorist Wilds operate the same way although they do move in opposite directions. As long as any Wild is on the screen during the base game, this continues the re-spins.

The different wilds are:

That’s a lot of different elements and many of them can appear during both the base game and the free spins modes. In general, the main things to keep in mind are the walking wilds as they trigger at least 5 re-spins in a row, assuming there is only 1 at a time and they don’t activate the free spins mode.

Meanwhile, the different grenades didn’t show up very often. When they did, they would often facilitate wins although I also had fire grenades appear that triggered 5 new rows and not register a single win. Still, as this happens without extra cost I can’t complain about it.

All in all, this is not a slot for players that are focused on the classic slot experience. Although the base game and the betlines are rather standard, the many features and the different types of Wilds can make it confusing for traditional players. I did find the paytable to give a good explanation but I don’t imagine a lot of people enjoy doing the research before they play a slot.

If you’re a fan of Counter-Strike or video games in general, you probably will recognize things when you play Ace Round. They did a really good job at capturing the look of this popular shooter as well as creating something almost as action-packed and intense as the game it’s based on.

It does overwhelm players with a large number of features, some of which appear randomly, others are only tied to specific free spins modes. I did enjoy that part of the game but I can imagine other players won’t have a good time with this.

The game offers a max. win of 376x your bet which I found to be very low, even though the game has low volatility. The number of wins did make up for it though and a big jackpot probably wouldn’t be a likely event anyway. Instead of winning the max. win you’re more likely to average out on smaller but more frequent wins.

Play Ace Round for free

Browse casinos with Ace Round and other slots from Evoplay Entertainment. Create an account and try the game for free before making a deposit.

You can play Ace Round in English, Chinese 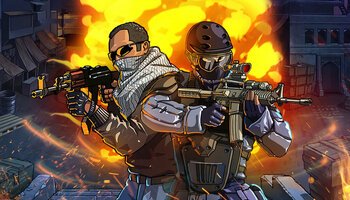