After Night Falls details the harrowing experience of living in a town where criminality rears its ugly head when the sun sets. Players get to watch criminals and the law try to outsmart each other in this 2012 slot that contains multipliers, free spins and a bonus game.

This game was released by Betsoft and due to its age has started to look somewhat dated. Just like other slots using the then-popular 3D graphics, we can easily tell that it has been around for a while. The textures are flat, the details are bare and a lot of the animations are extremely simple. This isn’t an attack on the game’s quality however since the gameplay is still rock-solid.

With a 5-reel, 3-row playing field and a standard 30 paylines the game offers players a rather standard experience at first glance. Players will not be surprised by any features that take away attention from the basic gameplay. The reels are filled with original symbols, with no card suits or card letters to take away from the setting.

The players will be aided by a police inspector who stands next to the playing field. Unfortunately, he is largely static but again that is mostly due to the age of the slot. Other games that were released during that time might have been animated but it would have taken considerable effort.

After Night Falls takes the theme of a crime-ridden city to heart and keeps things rather dark. By using gloomy lights from lanterns and television screens it makes sure that players can still make out details, so the symbols don’t blend together. Getting a win will result in the tiles being enlarged and the payline being highlighted as well as the total coin win displayed on the screen. It’s all terribly functional but not especially appealing to look at.

The game is listed as having Medium Volatility which about matched my experience. You will likely be granted wins frequently but these will rarely be big enough to make back much more than a single spin. To really make money you will need to trigger one of the special features. In my experience, this was difficult to do.

Players can opt to pick a bet between £0.02 and £150 per spin, giving them a lot of room to decide how much they want to risk. I would recommend starting off with a low bet and only increasing that as the volatility of the slot becomes clear. There is nothing worse than running out of coins before hitting that big win, and my time playing this game tells me that might take a while.

On the upside, the slot offers a max. win of 10,333x your bet which is obviously a substantial amount. Even when compared to more modern slots with high volatility this is far above that. The game offers no progressive jackpots whatsoever so this is a win that can be hit by anyone at any time.

After Night Falls might be an older slot but it still has a number of features:

These features are all somewhat obvious and especially the Bonus Round and Coin Win will not be very difficult to grasp. That’s not to say they fail to capture the essence of the slot, as they depict scenes that fit the setting. It’s also a nice way to get a coin win.

During my time playing, activating any of these features was extremely difficult. Much like the slot that Betsoft released the same year, At The Copa, getting any of them to activate might take you hundreds of spins. When they do activate, however, players can be reasonably certain they will make out with some coins.

If you’re not the kind of player that enjoys features that are very rarely activated, you might want to look elsewhere. For players that are fine with gameplay that centres around the main screen and only very occasionally moves elsewhere, this slot might be exactly up your alley.

After Night Falls is one of the slots that have almost reached their ten-year anniversary but they still remain very popular amongst players. The graphics might not be the biggest draw here, but the presentation is still on point. The game really hammers down on the idea of living in a crime-ridden city and having to deal with that.

When it comes to the more important gameplay, the slot is still as solid as ever. Players who manage to activate its many features will likely walk away with a tidy sum. Those few that manage to hit the maximum win will surely be even happier. It’s just not something most people should count on.

If you’re looking for a slot that has stood the test of time well and remains a favourite amongst many people, definitely give this game a slot. Even though the graphics haven’t aged particularly well, it still offers a more than solid experience.

Play After Night Falls for free

Browse casinos with After Night Falls and other slots from Betsoft. Create an account and try the game for free before making a deposit.

You can play After Night Falls in English, Finnish, Swedish, German and 22 other languages. 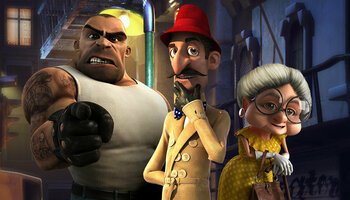