Aladdin and the Sorcerer™ slot review

Play Aladdin and the Sorcerer™

An evil Sorcerer has come to Aladdin and wants the power of the lamp for himself. Of course, this won’t stand!

Aladdin and The Sorcerer is a handsome slot released by Pragmatic Play in 2019. It’s a simple-looking slot with five reels and your more or less standard 20 paylines, but it does hold some interesting features. The most fun of them being the duel between our dear street rat and the mysterious Sorcerer.

The volatility level of this slot is high, which means that the winning spins, in general, are scarce. But, on the upside, it’s more likely to hit big wins on a long run than by playing medium or low volatile slots. However, it’s again good to keep in mind that also in the long run it’s more likely that the house wins.

Pragmatic Play does have several high volatile slots like Aladdin and the Sorcerer, so if you like this, then you might also like Hercules and Pegasus, Release the Kraken and Da Vinci’s Treasure. If you’re more interested in the theme, then I’d suggest checking out Aladdin’s Treasure, also from Pragmatic Play but with low volatility.

I was a bit disappointed with the simple design of the symbols, which are (excluding Wilds and Bonuses) just either plain or gold-framed jewels. They look just a tad too big on the screen, but then again, the other elements of the slot are more detailed so overall the balance is pretty nice.

Aladdin is hovering on the left side of the reels while holding the lamp, as the Sorcerer is maliciously glaring at him from the right side. They are constantly moving, but not too much to be a distraction. They can toss magic bolts and spells at one another if any of the Bonus symbols land on the reels.

This made me look forward to seeing the duel, but it wasn’t quite as magnificent as I had hoped. But, I guess it does its job. It’s still a nice-looking slot with beautiful animations, even though the graphics from the base game made me expect to see something grander. If I would have to think about the silver lining, then at least the duel animations don’t slow down the game too much.

The background music is nice and well-fitting. I would replace the gfx sounds as now they remind me more of old pinball machine effects than a modern slot game.

Aladdin and The Sorcerer is a slot game that has five reels, three rows and 20 paylines, so it’s quite basic. The paylines also go from left to right, meaning the winning combinations have to start from the leftmost reel.

You win free re-spins (for some reasons, these are not called simply free spins even though that’s what they really are) if both Aladdin and the Sorcerer appear on the reels 1 and 5.

Both Aladdin and the Sorcerer are simultaneously Bonuses as well as Wilds and they can substitute all other symbols in the game. However, regular Wilds do not substitute Bonus symbols.

The respin feature is the duel between Aladdin and the Sorcerer, so both of them shall receive three health bars.

Aladdin may cast a spell at the Sorcerer if only Aladdin appears on the reels. At the same time, he also adds 3-6 random Wilds to the reels. This causes the Sorcerer to lose one health bar.

The same goes for the Sorcerer if only he lands the reels without Aladdin on sight.

If Aladdin loses all of his health bars, the respin feature ends and the Sorcerer has won the duel.

However, if the Sorcerer loses the battle, as a reward you get to advance to level 2 of the respins.

In addition, the Wilds also get multipliers. The Wilds are x2 during the second respin and x3 for the third spin.

Aladdin and The Sorcerer does feel much like it is, a high-volatile slot that can easily drain your wallet before you even know it - and not giving anything back. But, that’s how these games work. It’s nothing new to me, but with this particular slot, I think the volatility level makes it more boring to play.

It proved to be very hard to trigger the respins and even landing either Aladdin or the Sorcerer on their own. The basic game does have naturally occurring Wilds, but of course, the bigger wins depend greatly on the Bonus symbols and randomly placed Wilds. And, even if you manage to activate the respins, it’s not certain if you get to the level 2 where the multiplier wins are hiding.

Aladdin and The Sorcerer does make an effort with the respin features and tries to stand out as a game that offers something more. But, as it’s so rare to get to the respins and especially to the second level, it quickly gets boring. Random Wilds every now and then are nice, but as that’s pretty much all there is to the base game, it didn’t manage to hold my interest very long.

In a summary, Aladdin and The Sorcerer is a nice-looking slot, but I think Pragmatic Play does offer better options for your time and wagers.

Play Aladdin and the Sorcerer™ for free

Browse casinos with Aladdin and the Sorcerer™ and other slots from Pragmatic Play. Create an account and try the game for free before making a deposit.

You can play Aladdin and the Sorcerer™ in English, Finnish, Swedish, German and 18 other languages. 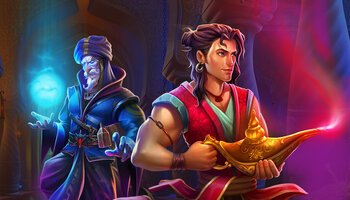