Alchymedes sets out to try and solve the age-old question if gold can be conjured out of base metals. I’m going to see if it’s possible to turn my funds into some big wins!

This slot was developed by Yggdrasil and released in 2017, impressing me at the time with the spectacular graphics. The game still looks amazing a few years later, with different symbols that are all animated and uniquely designed. Meanwhile, the background and peripherals all fit the theme and are animated as well.

Alchymedes puts us in the shoes of an alchemist who’s trying to create something special. With the help of different elixirs and a collection of symbols, the search is on for big wins. This all happens on a 5-reel, 4-row playing field with 30 paylines that pay both ways, effectively doubling the number of paylines.

The slot places us inside a dreary library that reminded me of Magic Wilds by Red Rake Gaming which puts you in an identical location. Golden Grimoire, created by NetEnt also had the idea to put its game on the dark attic of some mysterious castle. If you’re looking for a slot with this kind of theme, there’s plenty to choose from!

I thought the soundtrack sounded pretty familiar but it wasn’t bad. The quality was clear and it offered quite a sweeping, dramatic background music while the reels spun. I liked the sound of water dripping on wet stones that filled out the thematic setting as well.

While not all the symbols in Alchymedes are fully original, I can’t omit that the designers went out of their way to make everything feel appropriate for an alchemist’s science station. The high-paying symbols are different kinds of jars and potions while the low-paying symbols are based on the card suits. Instead of simply copying those, Yggdrasil did turn them into strange-looking runes that might explain the use of magic in the alchemy process.

With the small number of symbols, it seemed to be easier to get a win, which fit with the Medium Volatility that was listed. I found the game would quite regularly award wins but they wouldn’t be too big. The Wild and Multiplier features did help a lot in increasing those numbers. My funds also stayed relatively stable over time, picking bets between £0.30 and £60 per spin.

Alchymedes stays relatively simple when it comes to the special features, considering it has no free spins mode or bonus game. Instead, it offers players different ways in influencing the way the slot plays.

The main features in the game are the two contraptions on either side of the playing field. The left one deals with the pattern and frequency of Random Wilds that are added to the game. Wilds show up randomly but always expand into the pattern shown on the left.

I found it fun to try and find the best balance between the two features, but because the last win of a level could be very low even a hefty multiplier couldn’t save it. That’s why I personally went for a focus on Random Wilds.

The last thing to mention is the random bonus at the start of a new level. This can be a certain coin value, but also an extra slot on the Random Wild pattern, starting with a 3x multiplier and more.

Alchymedes is a pretty standard slot when it comes to its features and options, but these features do a lot to shake up the gameplay. I found the Random Wilds appearing often to be quite refreshing and some of the patterns would reward big wins. The multipliers helped to make the final win in a level more important. It would happen frequently that the final win was a simple low-paying three-of-a-kind win which meant the multiplier still didn’t result in something big.

The game allows players to pick a bet between £0.30 and £60. A max. win of 10,000x your bet is a very alluring prospect but I think the best way to get that is with a smaller bet. Although the medium volatility did fit my experience, the wins I would get would still regularly be small.

I found the game to be very fun even though it stays close to the classic slot experience. The beautiful graphics and the fitting soundtrack helped put me in the mood. I think the game will be a good fit for a lot of players, both those that enjoy the more old-school games and newer, more modern slots.

Browse casinos with Alchymedes and other slots from Yggdrasil. Create an account and try the game for free before making a deposit.

You can play Alchymedes in English, Finnish, Swedish, German and 18 other languages. 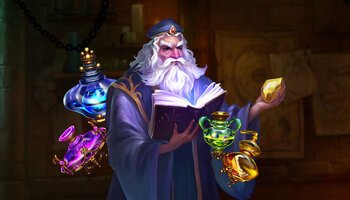