Aldo’s Journey has us follow a man named Aldo as he journeys around the world and around the playing field, exploring Wilds, Multipliers, Stacked Wilds and Free Spin as he goes. In a colourful world, we’re sure to see a lot of interesting things!

This slot with its non-standard 5-reel, 6-row playing field was developed and released by Yggdrasil in 2019. Even though the game looks quite unique it still plates much like the regular slots most of us know. The excellent design does a lot to make us more familiar with the gameplay as it goes. There are a sizeable 65 paylines with which to win, and these are all filled with great-looking symbols.

The designers of Aldo’s Journey decided to go for a little simpler designs, given that there is a lot happening on the screen at all times. There are basically gems and slabs that make up the high- and low-paying symbols respectively. At the same time, we see a top-down view of what seems to be a portion of the world with both Asian, Egyptian and European buildings.

There is a lot of movement in this slot, not only because Aldo is literally hopping around the playing field. There are also trees rustling in the wind, flags moving and ships bobbing in the water. At the start, my eyes were darting all over the place but as I played for longer I calmed down a little and was able to focus on the gameplay.

The slot has a number of original symbols but that doesn’t mean they’re terribly innovative. The low-paying slabs simply have different card suits stamped on them, while the high-paying ones are colourful gems. The use of colour here really helps in spotting wins and paylines. Only the Free Spins symbol was really animated, as a compass that spins its needle around.

Activating the Free Spins mode sends us into a close-up location on the world, and depending on which place we go to a different bonus feature is activated. More on that later. With the game’s Medium Volatility, players can expect more spaced out wins without having to wait for the Free Spins to actually get some coins. Instead, I felt like the Free Spins mode was just a better way of getting wins than the base game.

There are a number of symbols used in Aldo’s Journey, which are:

Even though the payouts for win lines are very low, the larger playing field and some special features help in creating multiple wins almost every spin. I found that the win to loss ratio during the base game was pretty steady with only the occasional dip below my starting funds. Those were then compensated for by triggering a Free Spins mode.

Aldo’s Journey has a collection of interesting features that are worth discussing:

The base game is rather simple but it is good to note that the character Aldo is seen hopping around the playing field. He acts as a Wild and thus can help to create wins. He is also used to determine which area is activated when Free Spins symbols appear. Depending on the quarter he is standing in, that area will host the Free Spins.

If Aldo stands in the centre of the playing field, he activates the Wild Time feature. What this does depends on the mode:

There are four areas in the game and depending on the location of Aldo when 3 Free Spins symbols appear, one of them activates. Each area has its own addition to the Free Spins mode:

This might seem like a lot but the game shows a quick splash screen with an explanation for the location before the Free Spins start. I thought it was a fun addition to the game but clearly, there are better and worse areas. Unfortunately, there is no way to influence which one will activate.

Aldo’s Journey is a great fit for the Yggdrasil library in how it is not like other regular slots. It’s not too out there as some other games they have made but it still offers a load of changes to the classic experience. More than enough to turn away more traditional players I think, but many more should be excited to play this game.

The gameplay is quick and fun with something happening every spin even though it’s not always a win. Aldo jumping around the screen adds a level of excitement that most other games can’t offer. It also looks great as always, with a lot of character in the setting even when the symbols are rather simple.

Players can pick a bet between £0.10 and £100 per spin to tweak the experience to their liking, with a respectable max. win of 4,205x your bet to look forward to. The free spins mode with its 4 locations was the cherry on top, offering a lot of replay value just to see how the different features perform and which one is best!

Browse casinos with Aldo's Journey and other slots from Yggdrasil. Create an account and try the game for free before making a deposit.

You can play Aldo's Journey in English, Finnish, Swedish, German and 18 other languages. 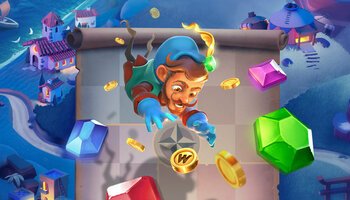