Ali Baba’s Luck Megaways is a slot that is set in the ancient Middle East during the tales of 1001 Arabian Nights. The famous robber Ali Baba and his band of bandits that go out to open a mysterious cave filled with treasure spend his time with multipliers and free spins in this game.

The slot was released in 2020 by the experienced developer Red Tiger, showing off a number of interesting graphics and sporting an appealing soundtrack. The game is clearly set in a specific time period in the Middle East but unfortunately, it doesn’t quite use this setting as a source of inspiration for all its symbols. The 6-reel slot with up to 15,625 paylines is largely filled with standard card letters.

In the background, we can see what looks like some sort of living quarters, perhaps as part of a palace. There are jugs and flowers while there is a balcony beckoning in the distance, obscured by the playing field. The symbols in the slot itself are divided into high- and low-paying symbols. The low-paying symbols are the aforementioned card letters while the high-paying ones depict some characters or items that might be related to the tales the game is based on.

When it comes to the sound design, the slot keeps very soft music playing in the background that enforces the setting. The sound effects for wins and special features also keep somewhat in line with the theme but they could have done a bit more creatively in my mind. All in all, I found the sound design to be good at setting the mood but perhaps a bit too much in the background.

Ali Baba’s Luck Megaways needs quite a lot of room for the maximum playing field, meaning that the symbols vary in size depending on the number of symbols on a reel. This is done well, but because of the dark colour, it can be hard to see how many tiles a reel exactly houses. The symbols are somewhat inspired by the setting but I would have liked to have seen the low-paying card letters be integrated a bit better.

If you’re a fan of the Arabian setting, I think the game does quite a good job at bringing that to the front but it will be diminished somewhat by the simple letters. The colour scheme of the slot is also helping the setting. Something to keep in mind is that the Megaways feature and a large number of different symbols make it harder to get a win, which is why it has High Volatility.

The player can choose a bet between £0.20 and £40 per spin, letting them decide to take a smaller or bigger risk. It is best to start with a modest bet and see how often the game awards wins, before deciding whether or not to increase these bets. In general, I would advise against it since I found the game to be reluctant at granting bigger wins.

When you play the slot, you’ll encounter the following symbols:

Ali Baba’s Luck Megaways has a small collection of features that work well together but will likely be familiar to most players. There are no real surprises here, but the Megaways feature is something of an acquired taste and a lot of classic players likely won’t appreciate it as much.

The total features in the slot are:

When playing the game, players will most likely see wins appear as a result of the standard gameplay. The Megaways feature plays a big part in the game and can sometimes create bigger wins but more regularly prevent them. I’m not a huge fan of the feature and I found it to be rather frustrating while playing this game.

There is a mechanic that will track wins, adding the symbol to a tracker at the top. In the following spin, that symbol will be gold and double in height if it appears on the screen. I found it to only very rarely facilitate another win, but during the free spins mode, this symbol will continue to appear larger than before the entire mode. As a result, it’s more likely for wins to appear.

Speaking of the free spins mode, it was very hard to activate and I only managed to trigger it once during my time playing. Even then, the total win was disappointing compared to the effort it took to activate it. It also didn’t compensate for my losses trying to get it to trigger.

Ali Baba’s Luck Megaways gets some points for trying to make the slot appear related to the topic and the setting, even though it’s not perfect in that regard. The culture and history of Arabia surely allow enough inspiration to replace the standard card letters.

The gameplay is a weak point, giving little motivation to the players to stick around. The Megaways feature will occasionally afford a bigger win but with low payouts, this often doesn’t even matter that much. With the free spins mode so hard to activate, that also doesn’t help.

If you’re a high roller, the max. win of 20,000x your bet might be a good incentive to stick around and play this game for a while longer. If you’re just looking for something casual and nice to look at, you also might enjoy this game. Players that prefer a game that offers excitement and the occasional bigger win will likely get a better experience with another slot.

Browse casinos with Ali Baba's Luck Megaways and other slots from Red Tiger. Create an account and try the game for free before making a deposit.

You can play Ali Baba's Luck Megaways in English, Finnish, Swedish, German and 23 other languages. 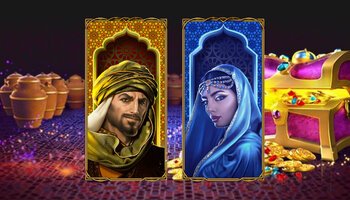