Alice Cooper and the Tome of Madness slot review

Play Alice Cooper and the Tome of Madness

Alice Cooper and the Tome of Madness puts the famous rocker into a dark setting with a definite horror twist. The game brings to life not only his persona but also adds different features to the game. Players will have to deal with free spins, cascading reels and random wilds.

The game was developed by Play ‘n GO and released in 2021, making it an excellent way to see what this developer is currently up to. This slot looks absolutely stunning, with some amazing graphics and a lot of animations. Alice Cooper obviously takes up a big part of the game, being on the screen for most of the time.

When it comes to the gameplay, the slot is built around a 5-reel, 5-row playing field that uses the Cluster Pays mechanic. Anytime a player gets 4 or more matching symbols to touch either horizontally or vertically, a win is triggered. Much of the game also relies on getting multiple wins in a single spin, filling up a special meter that will unlock other features.

Since the game draws such heavy inspiration from Alice Cooper it makes sense that his music is also heavily featured. Oddly enough, that’s not really the case. During the base game, we hear some soft gothic music in the background but not much more. We do hear his actual voice commenting on the game itself though, connecting him to the slot.

Alice Cooper and the Tome of Madness is set in a dark castle where we see how the famous rocker is chained up. This also means that the designers were pretty free to decide how they would fill the reels. Fortunately, they chose to use some creativity. Even though the symbols might not be the most original with their selection of skulls and gems, they are all original and animated. They look very good.

The game has High Volatility unlike a lot of Play ‘n GO new slots seem to have. With an RTP of 96.2%, it actually does stay on par on that level. While playing I felt like the slot awarded wins pretty regularly but they were often not very big. As a result, my funds largely stayed the same, only slowly going down after a lot of time playing. An excellent game for those that enjoy spinning a lot without risking much.

Players who would like to either increase or decrease their investments can pick a bet between £0.10 and £100 per spin. The game further included a maximum win of 3,000x your bet. That’s a nice sum to look forward to, although obviously, most players won’t be getting their hands on it.

Alice Cooper and the Tome of Madness actually has quite a few features that augment the gameplay experience. These include:

Although there are a lot of features, I felt the game did a good job at keeping them clear. The Alice Cooper Wild is a definite highlight for me, as it shows off the famous rocker as well as being very helpful. This Wild can even appear during the free spins mode, making that mode even more lucrative.

The free spins mode is activated randomly whenever the player doesn’t get a win. This can take a long time or it can happen a few times in a row. I wouldn’t say I saw it trigger often but it was frequent enough to feel like part of the slot.

Alice Cooper and the Tome of Madness feels like a loving tribute to Alice Cooper. The rocker plays a big part in the slot, both when it comes to his visual appearance as well as his voice. It’s a bit odd they don’t use any of his music but that might be a copyright issue. The visual style works really well and there is a tonne of details to be found.

I found the gameplay to be very solid, with a lot of features that augment the gameplay in big and small ways. Unlocking Alice Cooper’s walking wild will always be beneficial. When the free spins mode is activated, players can pick 1 of 4 different modes that help them in a variety of ways.

Slot purists might feel the game to be too overwhelming. The features aren’t all introduced at the same time but there are still a lot of them. For people that enjoy an entertaining and stress-free experience where a limited budget can still offer hours of entertainment, I would definitely recommend it.

Play Alice Cooper and the Tome of Madness for free

Browse casinos with Alice Cooper and the Tome of Madness and other slots from Play'n GO. Create an account and try the game for free before making a deposit.

You can play Alice Cooper and the Tome of Madness in English, Finnish, Swedish, German and 30 other languages. 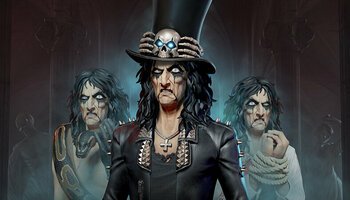