You don't have to delve into the Picatrix on a full moon if you are an aspiring slots alchemist. Visiting Alkemor's Tower on any night can always amount to a fun-loving gaming experience.

The game was released by Betsoft in 2015, but magically - and that's no pun intended, it still holds its own more than six years later.

I've found the 3x5 reel set quite dynamic because it comes with a payout system of 243 win-ways and a good amount of alchemy.

Betsoft's intention must have been to create an ivory tower of a slot game, decked out with grimoires that can trigger a confluence of essential elements and thereby improved odds for a good win.

The maximum payout potential of Alkemor's Tower is a mesmerizing 2,166x your bet which can come through from a free spins bonus turning up the best possible outcomes.

Even without this bonus feature, the game can create fun-loving gameplay that stays with you. I've enjoyed it on several occasions and consider it a potential pick alongside iSoftbet's Merlin series.

This is probably the best game by Betsoft in the class of '15. I simply love it when the symbols tell a story and that's more than obvious in Alkemor's Tower. You'll be in the company of pot-grown mushrooms, magic scrolls, golden medallions, grimoires, rings and many other oddities, including the portrait of Sir Alkemor.

There is definitely some funky animation to encounter from witnessing the winning combinations and extra features come to fruition. Another notable detail is the soundtrack. I wouldn't call it immersive but it does pull you into the game. Overall, it's hard not to love the graphic design and this is one of the reasons why the game is still hot.

This aspect of the game is multi-layered and consists of several symbols that can trigger different modifiers. The fun in the base game begins with the Elemental symbols.

The four eternal elements - earth, wind, water and fire are represented by a respective bottle. These can land on the reel in the middle but flourish into life if they interact with the Spellbooks on reels one two, four and five.

Alkemor summons the power of water which comes splashing across the reel set. In the aftermath, all Spell Book and Elemental symbols turn into Wild but one of the books on reel one will be given the guise of a random paying symbol. In other words, it's a long way of saying 'guaranteed win'.

The earth symbol interacting with earth magic results in an earthquake which turns into Wilds all of the Spell Books and Elemental symbols. The remaining symbols disintegrate and create a cascade of new symbols which is followed by a reevaluation of the bounty.

When the right symbols related to the Air element combine, Alkemor's Tower rumbles under a vehement, Wild-bringing wind. The windfall is calculated after all standard and non-paying symbols get a good reshuffling. The Spell Book symbol on the first reel then becomes a random paying symbol.

The Fire Spell renders into Wilds all of the Spell Book and Elemental symbols on reels two to five. As per the usual, the Spell Book symbol turns into a random paying symbol and the winnings are evaluated.

I find the reel modifiers to be charming and a treat but the Free Spins bonus is more engaging. If the game is favourably inclined to you, the bonus feature can turn up really nice prizes.

First of all, to get there you need to get either two Book of Magic symbols plus a third one which can either be wrapped in a Vine or marked with the Black Hole seal. You can get 10, 12 or 15 spins.

The respective Nature and Celestial levels of the free spins bonus come with four paying symbols and a special symbol.

Is marked by the Vine symbol which can land anywhere on reel three and remove a random number of symbols in return for a prize.

Is marked by the special Black Hole symbol that can land anywhere on reels two and four and do the same - generate an instant prize.

The main benefit of either of the bonus levels is that there are only five potential symbols on the reel set. This improves significantly the odds for landing a winning outcome. Also, the special symbol can land in the right place multiple times and that can amount to a nice aggregate prize.

Alkemor's Tower doesn't have an expensive cover charge. You can select a coin value between one penny and £1.00 at the first level and wager between £0.30 and £30.00 per spin.

Although the game has a very decent maximum payout potential (2,166x your bet), the paytable is a measured balance between that and the reel modifiers.

You can't get the max win from the base game, but you can pocket decent winnings thanks to any one of the Elemental Spells. Winning outcomes on their own tend to fizz out from the balance.

Three matching symbols don't return your full bet until the seventh symbol (golden medallions) out of nine paying symbols in the base game.

This is the structure of the paytable if you are betting £0.90 per spin:

I think Alkemor’s Tower is a fun game to play and one that can arrange multiple smaller surprises as opposed to one and an exceedingly elusive miraculous big win.

The volatility is medium which is just right for the kind of a game that balances four reel modifiers in the base game on one side and generally small payouts on the other.

I wouldn’t be telling the truth if I say that I didn’t find the pennies to your bet unnerving. The reel modifiers can redeem this characteristic of Alkemor’s Tower but you also have the option to play the coin toss game following any winning outcome and turn those pennies into pounds.

The famed Merlin series by iSoftbet have three or four go-to games with great engines and features, but I think this game has a unique charm also. It’s totally playable and worth checking out.

Browse casinos with Alkemor's Tower and other slots from Betsoft. Create an account and try the game for free before making a deposit.

You can play Alkemor's Tower in English, Finnish, Swedish, German and 22 other languages. 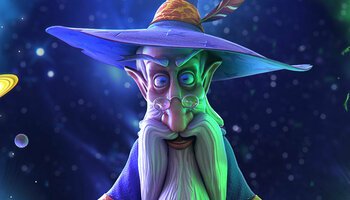