Mele Kalikimaka to all from NetEnt. Aloha! just got a bit cooler. Christmas has come to Hawaii with some new mechanics.

NetEnt has been busy in 2020 making new versions of their classic slots. We even got a Christmas-themed game when it was time to update Aloha!. Aloha! Christmas takes the original idea and pushes it a bit further.

Even though there isn’t much snow in Hawaii, the mood is very Christmassy. Even the tiki statues are saving up to take a trip to the North Pole. You can even spot Santa Claus himself in there.

At first glance, the game looks like it hasn’t changed much. There is the same grid, the same symbols and the same cluster wins. But when you start playing, you will quickly see that a lot of smaller things have been updated.

If you have played the first Aloha!, then you are right at home here. Everything looks familiar and the island paradise is as welcoming as ever. We just moved away from the volcanoes and went straight to the tiki bar.

Aloha! Christmas is a cartoony slot with a light-hearted attitude. It is a great place to learn how to play cluster games if you haven’t tried them already. Everything here is relaxed, easy and player-friendly.

The Hawaiian music is taken straight from the first game, but with a little seasonal twist. When the reels spin, you can hear sleigh bells jingling. The game is a lot like Aloha! Cluster Pays when it comes to sound and visuals, but why fix what isn’t broken?

We even get the same tiki statue as our cheerleader. The statue reacts to your game and dances when you get a good hit. This time the lei has been replaced with a garland and the statue has a Santa hat on.

The reels are filled with thematic symbols straight from Hawaii, or at least the idea of Hawaii. The seven regular symbols are a coconut, a flower, a seashell, a pineapple and the different coloured tiki heads. These are the same symbols from the first game.

Aloha! Christmas is a cluster game, so it doesn’t have any paylines. You win if you get at least 9 of the same symbols touching each other. The bigger the cluster is, the more you will win.

If you have played the first Aloha! slot, then you should be familiar with the special features. They are basically the same features but each has a little extra added to them. For example, the Mystery Boxes that all reveal the same symbol can now also have multiplier wilds. Same thing with the re-spins and free spins, both of them have multipliers added.

The biggest change was the balance of the game. The volatility was increased from low to medium, which made a huge difference. The game now requires you to hit those special features in order to get a bigger win. Without those multipliers, you won’t get far.

Aloha! Christmas is for those players who want to take more risks. This time you need to put down the Mai Tai and focus on the game.

Aloha! was a pioneer in Cluster Wins mechanic, so it was obvious that sequel would also have clusters. Instead of paylines, you just need to have the symbols touching each other. If there are enough symbols in a cluster, you win. The minimum is 9 symbols and the more you get, the bigger your win is.

The statues have some gifts for you and they are all labelled with a question mark. When the reels stop, the boxes will all reveal the same symbol. If there is no chance of them creating a winning combination, they stay closed.

Up to this part, it’s the same as it was in the first game. What makes Aloha! Christmas better, is that there can be an extra multiplier wild hidden in there as well. Depending on where you are in the game, the multiplier can be between 2x and 7x.

Sticky Win Re-spins is a random feature that can activate at the end of any winning spin. The winning cluster is locked in place and the rest of the symbols are spun again. The re-spins continue for as long as you get more symbols to your cluster.

Once again, this feature starts off the same as in Aloha! Cluster Pays. This time there is a meter on the left that tracks how many symbols you have in your cluster. If you reach certain thresholds, you get an extra multiplier.

A stamp is a great way to spread the relaxed feeling to one and all. Just get three stamps anywhere on the reels and you are whisked away to the tiki bar. But first, you need to make a little choice. Are you a risk-taker or do you want to play more carefully?

During the spins, there is a new sea star symbol. You collect each of them and every third one will remove all copies of the least valuable symbol from the reels. For every three stars you get, you also receive 2 extra spins.

I’m a sucker for Christmas-themed games and when I saw that Aloha! got a festive sequel, I was all over it. The best thing about it is that it’s much more than just a snowy theme over the old game.

If you compare this Aloha! with the first one, there are actually quite a lot of differences. The mechanical updates are one thing, but the biggest one for me is the balance of the game. It is no longer a calm low-volatility slot, but a much more explosive game. Now it leans heavily on multipliers and free spins.

I started playing the same way as I would play Aloha! Cluster Pays and it turned out to be a mistake. I felt like I wasn’t winning anything. After a while, I realised that I need to change the way I think about the game and try to focus more on the special features and heavy hits.

After that, I started to enjoy the game more. The icing on the cake was a massive hit I got during free spins. 7x multiplier plus 21 green totems equals a happy camper.

Browse casinos with Aloha! Christmas and other slots from NetEnt. Create an account and try the game for free before making a deposit.

You can play Aloha! Christmas in English, Finnish, Swedish, German and 20 other languages. 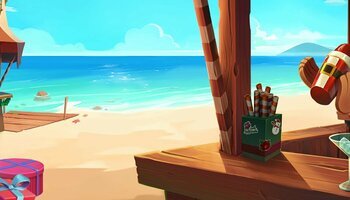