It might be the dead of winter right now, but Aloha! Cluster Pays by Net Entertainment, invites you to leave the cold winter months behind and to dive knee-deep into the Summer. Set against the backdrop of what I presume to be Hawaii, the average pay-out percentage is that of a whopping 97%.

The pay-outs are incredible during the base game, but the features including sticky wild substitutions, free spins bonus rounds and much more means that your bankroll will be heaving with the weight of money.

This six-reel and five-row 2016 slot release is visually striking, even though it doesn’t boast all the mod cons of other NetEnt games. Personally, I love the Summer feel of this game, and you can also feel the heat emitting from the reels as you spin them along. Perhaps it’s the longing for warmer months, or maybe, it’s the massive volcano that the game is sitting under.

With bets starting from as little as 10p a spin and the Tiki god on the side, cheering you on, this game reminds me a little bit of slot game Koi Princess. Both slot games have gorgeous graphics and sounds and a character dancing and clapping as you hit winning pay lines.

This game was released straight after the Gun ‘n Roses slot game. If you are well-aware, the latter was a game that pushed all boundaries. The same cannot be said about Aloha!, but I’ll let this slide as I think, the company has succeeded in creating an overall gorgeous game.

With the merry music swaying me side to side, this 5-reel slot features the Cluster Pays mechanic. Land similar symbols side by side in a cluster, to trigger wins. This is similar to more modern slot games such as Gemix by Play ‘n Go.

While the game has exciting features, the visuals aren’t quite as striking or as superb as we’d come to expect from NetEnt.

The symbols in this game are coconuts, pineapples, seashells and wildflowers, which replace the standard playing cards as low-value items. An assortment of coloured Tiki masks are the highest paying symbols. The postage stamp acts as the free spin icon, while a question mark etched onto wood acts as a Wild.

But putting symbols aside, the fun truly kicks off with the features. Since there are no pay lines in the conventional sense, it might be a little confusing at first. Essentially, you just need to land clusters of the same symbols in order to achieve a win — land nine or more symbols of a kind to trigger the Sticky Wins Re-spin feature.

When this happens, the original cluster stays put, while all other symbols re-spin for free. I need to point out that re-spins are free here, as re-spins found in other games by other software providers aren’t.

Anyhoo, during the Sticky Win Respin, the cluster puffs up in size, by joining in new symbols, which also become sticky and stay put for another re-spin. This keeps on going until there are no clusters formed. Should you succeed in filling the entire screen with one humongous cluster, you’ll trigger the maximum win for that symbol.

Then there is the free spins bonus. Land between three and six free spin symbols to earn yourself between nine and twelve spins which are also re-triggerable. Oh, and if that wasn’t enough, the free spins feature expands with a Symbol drop feature, where the lowest paying symbols drop off the screen, making room for higher-paying symbols to drop in for a big win.

I found this quite attractive since the lowest-paying symbols are more of a distraction and less than rewarding. This means that landing a green, blue or red tiki god would lead to some proper wins. This wasn’t the case for me, but who knows, you might be lucky.

Perhaps Aloha! Doesn’t enjoy the same fuss as that of other NetEnt slot games, but thanks to this colourful slot game and features, it makes it an ideal slot game for those players looking to play something a little different and less conventional.

I succeeded in triggering the re-spins quite a bit, with winning symbols staying put in place. But landing the free spins round proved to be challenging and less frequent than I would have hoped for.

Ultimately, I found myself spinning the reels for a long time, with not much showing for it, as I was unable to trigger the free spins round much.

Sure, it’s a colourful and cheerful game, but without the key features cropping up more often, it left a dent in my bankroll.

Overall, I would recommend this slot game, but a word of caution, perhaps, have a set budget for this game, as you might struggle to land big wins.

Browse casinos with Aloha! Cluster Pays and other slots from NetEnt. Create an account and try the game for free before making a deposit.

You can play Aloha! Cluster Pays in English, Finnish, Swedish, German and 20 other languages. 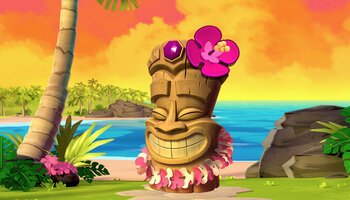 One of my favorite slots to grind. I've never really won any big wins from the game, but I really enjoy the feel of the game (graphics + sounds).