Annihilator is a slot that is based on a trash metal band from the 80s, which is a rather niche topic but not something developer Play ‘n GO hasn’t done before. The game features the original guitarist as well as stacked Wilds, free spins and a bonus game.

This slot was released in 2020, a good 40 years after the band was at the height of its popularity but the way it looks brings this into the modern age. The original guitarist, Jeff Waters, is back to represent the Wild and he will be seen playing his famous guitar whenever he’s part of a win. Most of the game takes place on the 5-reel, 3-row playing field with a modest 10 paylines.

A lot of the game is based around their song The Fun Palace, which explains the gloomy mansion in the back, the creepy dolls that pop up as bonus symbols and the bonus game which features even more scary dolls that the players have to pick from in order to win a series of coin wins. It all looks great and there is a lot of attention to detail.

I was glad to see there was quite some movement in the game with the use of various animations. Jeff Waters appears as himself in a video, shown to play his guitar. Obviously, a slot about a band can’t go without the music and we’ll find that here as well, with The Fun Palace playing in the background most of the time.

Annihilator is based on the band which developed its own art and iconic themes over the years, used during their concerts or in their album covers. We can see the devil, a statue of a woman holding a doll, the famous guitar and more random symbols like that appear on the screen. The low-paying symbols are generic card letters but made to fit the theme of the game somewhat so they didn’t stand out too much.

When it comes to the gameplay, you’ll have to contend with the High Volatility that is likely to keep players from winning all the time. That said, I found that any wins I did get paid out quite a lot which helped keep my funds stable. I wouldn’t say I was always in the positives but I was still close to staying even.

If people are eager to take a risk or they would rather play it safe, they can pick a bet between £0.10 and £100 per spin. This will allow them to either increase the size of their wins or reduce the risk of their losses. There is also a maximum win of 5,000x your bet which is a very standard amount for a game with this volatility.

The symbols in the game are listed below by their importance:

Annihilator has a collection of features that will augment the experience for players in different ways. I didn’t feel like the player had a lot of control in these features for the most part, but the bonus game does let them pick dolls that hide different coin wins. I think that interactivity is quite nice and a good way to spice up the gameplay.

The features aren’t anything special on their own and I’m sure that most players will be familiar with them separately. There is some new enjoyment out of the way the features are connected though. I especially appreciated how it is possible to activate the free spins mode through the bonus game.

In my experience, the bonus game is a lot easier to trigger than the free spins mode. During my time playing the game, I never managed to find the Scatter but since it is possible it would allow the player to circumvent the usual way of activating the mode and just start it through the bonus game.

The Wilds play a big part in this game and are present in different ways. Wilds can become stacked to fill the reel and will move around the screen during the free spins mode. If they end up on the right spot they can turn a big part of the playing field into wilds, facilitating big wins.

Annihilator is a must-play slot for people that were fans of the original band back in the 80s. Even if you’re not and you never heard of the band before it still pays off to check it out. It looks amazing and has some great music to go with it.

The gameplay is solid and I found it a lot of fun. You won’t be seeing a lot of the free spins mode but the bonus game can be almost as lucrative. The jackpot that is offered isn’t the biggest but it is perfectly average for a slot with this volatility.

Browse casinos with Annihilator and other slots from Play'n GO. Create an account and try the game for free before making a deposit.

You can play Annihilator in English, Finnish, Swedish, German and 30 other languages. 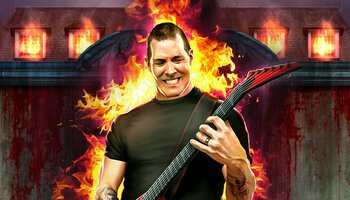