Arabian Nights is a legend among jackpot games. It was the first NetEnt game to feature over a million-pound jackpot.

In 2005, NetEnt released their first-ever major progressive jackpot game, Arabian Nights. This was their grand entry to the million-pound jackpot scene, and the game was a big hit.

People loved the game, and even I found myself playing it a lot those days. As the years went by, the glamour faded and the competition grew fiercer. Arabian Nights is a classic, but in my opinion, in a dire need of a remake.

The game draws inspiration from the tales and history of the Arabian Peninsula. There is no real storyline here and the game is not directly connected to any of the One Thousand and One Nights’ tales.

I find it hard to compare modern games to those made in the early days of online slots. I feel like I need to separate the audio and visuals into two different categories -what it was and what it is.

Back when Arabian Nights was released, the game looked nice. It had the vibrant sounds of a fruit machine with a light-hearted, cartoony look. Looking at it through modern eyes, the game looks outdated and the sounds don’t fit the theme at all.

The ambient sounds of crickets and owls don’t do much, and the sound of the reels spinning is jarring. The only thing that fits the theme, is the small jingles you hear when you win something.

In the end, the theme is only skin deep. Nothing in this game is truly connected to what you see or hear. The symbols could be replaced with anything, and the game would still feel the same.

You find the basic assortment of symbols here- Mosaic numbers, sandals, sabres, camels and tents, you know, all the stereotypical stuff.

The base game runs on five reels and ten paylines. Among the normal symbols, you find wilds and scatter symbols. They give out more wins, better multipliers and even free spins.

On a positive note, Arabian Nights has pretty decent wins in the base game. You don’t need to hit the special features to win big, but they sure do help. This is great news for those, who like to play with a smaller bankroll.

The Arabian Nights progressive jackpot seeds around 110,000 pounds and the biggest win ever was over 7.7 million pounds.

One thing needs to be cleared up, and this had me confused as well. The rules of Arabian Nights have been updated and the current version is a bit easier. Previously you needed to play with maximum bet to win the jackpot, but this is no longer needed.

Playing with higher bets will increase your odds of hitting the jackpot, but it is not required anymore.

Arabian Nights is a living legend and will be remembered forever. A big question still remains: is the legendary status enough for it to be a good game? In my opinion, it is not.

When you look at the core gameplay, Arabian Nights is a simple slot. This was normal when the game came out, but now we have seen so much more. It is getting harder and harder for me to go back to games like these. Simple graphics, boring sounds and unoriginal gameplay are not what a modern player wants.

If Arabian Nights did not have the million-pound jackpot, no one would play it. That is the sad truth. If you want to go for the jackpot, then play Arabian Nights. In any other case, don’t.

Browse casinos with Arabian Nights and other slots from NetEnt. Create an account and try the game for free before making a deposit.

You can play Arabian Nights in English, Finnish, Swedish, German and 20 other languages. 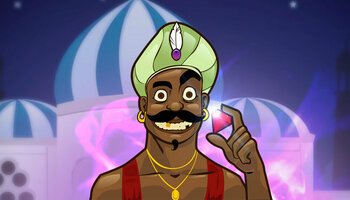