Arcade Bomb has us play a classic-looking slot with retro graphics that remind us of old-school arcade games that we all used to toss coins into for hours at a time!

Released in 2016 by developer Red Tiger, Arcade Bomb attempts to bring back to life the classic arcade aesthetic many older players probably grew up with when they were younger. Pixelated graphics, a thumping and otherworldly soundtrack and a bunch of exploding bombs are sure to make this a very interesting experience!

The game has an interesting look that hangs in between classic fruit machine symbols and some retro-chic images. Everything is done in high detail with the bombs standing out, both literally and artistically. They have the sort of blocky shadow that’s popular in old-school comics which adds yet another layer to the slot. The game uses a standard 5-reel, 3-row playing field and a respectable 20 paylines.

I found it all to look simple but effective, giving off this colourful and rather chaotic sense of style to the game that makes it stand out even though the symbols are largely unoriginal. The background looks like the night sky at first glance but upon closer inspection, we can see they’re actually white pixels drifting in the black.

Meanwhile, the soundtrack really drives home the arcade setting. The wins especially are amplified by the classic sound of beeps and blips, while the soundtrack is rather subtle but still provides us with a thumping bassline.

The symbols in Arcade Bomb are based on the classic fruit machine, drawn in sharp detail and with some fancy gloss on them. I thought that was a bit odd considering the theme of the slot, and I think it would have actually been a better fit if they had made it look more blocky and pixelated instead of the other way around.

The bombs hang over the reels which is because they’re sticky. Once they explode they show the symbol that was underneath in a quick and cartoony explosion.

Although the low-paying symbols have a rather low coin value this fits the Low Volatility and the game has some specific ways in counting the betlines. More on that in a bit. The way the winning paylines are shown is clear and fast, making sure we are always aware of what triggered a win.

Arcade Bomb tries to go back to the classic sense of arcade slots but still adds quite a few interesting features into the game. Let’s go over them first:

The Pays Both Ways not only effectively doubles the 20 existing betlines, it even makes it possible for a spin to grant a win that doesn’t start at either side of the slot. Counting from the middle, a spin might grant a win that only affects reels 2, 3 and 4. Because of the number of paylines and the way they’re counted, any time a symbol appears on 3 consecutive reels it will count as a win no matter where it is on the screen.

In combination with the Bombs mechanic, this results in very frequent wins and explains the low volatility.

The bombs require some extra in-depth explanation since there are in fact 4 different coloured bombs. Each colour bomb has its own pattern.

Whenever another bomb is caught in the explosion of a bomb it will trigger that bomb’s explosion as well, possibly filling up the entire playing field with the same symbol if there are enough bombs on the screen.

I thought this part of the game was very fun and very quick, resolving the explosions in a matter of seconds to not slow the gameplay down. It also worked with a lot of exponential returns, quickly causing an entire playing field to fill itself with a symbol because the explosions caused other bombs to explode as well.

Arcade Bomb is a game that says it wants to be a retro-slot but simultaneously adds a bunch of beautiful graphics and a rather extravagant feature to its repertoire. The game offers sharp images, a nice if boring soundtrack and the usual quality of life features that make playing slots so much fun.

Players that are expecting a return to the classic fruit machine won’t find it here, even if the symbols and images might make it look like they will. The Bomb feature is a lot of fun but it’s a far cry from the original gameplay and it will mostly be appreciated by players that don’t mind some innovation in their games.

The low volatility coupled with the ability to bet between £0.10 and £100 per spin might see players get a large return on their investment but I would be very careful. Even with this volatility, it can also eat your funds within only a couple of spins if you’re not apprehensive. The max. win of 1,000x your bet meanwhile always feels like it’s in your reach, simply requiring a set of bombs to fill the reels with the highest paying symbol!

Browse casinos with Arcade Bombs and other slots from Red Tiger. Create an account and try the game for free before making a deposit.

You can play Arcade Bombs in English, Finnish, Swedish, German and 18 other languages. 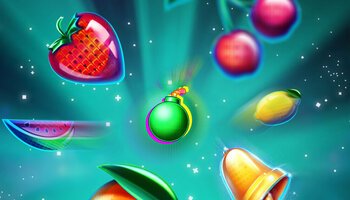