Who knew an 8-bit video slot called Arcader can be so movingly unique and captivating? I found the game completely by chance and jumped right into it, mainly because of the Thunderkick logo.

Arcader attacks the Arcade theme in a way that is bold and to-the-point. Spinning the reels reveals an array of simple symbols - fruits and classical slot icons that are heavily pixelated and have the glow of a neon sign.

Although the tilted reel and big icons set gives the appearance of a playing field that's greater than the usual, Arcader comes with the usual 3x5 layout with 15 paylines.

In terms of extras, the game comes with the right number of features. It has a Wild symbol, a free spins bonus and a modifier representing the key engagement in the base game - the Expander.

This is not all, I found surely enough, changing upon the Mystery bonus game and the kickers that can entail thereof.

Bundled together, the features click together rather well for seamless gameplay. They can pop up during any spin to shorten the odds and help you get to winning outcomes of up to 1,600x your bet.

I had fun with Arcader and also found the set of specs inviting. Clean-cut medium volatility enabled me to experience wins at a not-too-bad hit frequency of 23.10%

If you were ever bitten by the Arcade bug, Arcader may remind you of the classical vibe found in old video game parlours. The design gives hints of Galaga and Pacman but there is definitely a nod to fruit slots in here also.

Thunderkick's design team has gone for big, loud symbols against a black background. This works quite well for the theme. I tried the game on mobile and PC and found it to play seamlessly on both. If you are touched by 1980s synth-pop, the soundtrack is going to feel right up your alley.

Starting with the Wild, it does the usual work of substituting for all symbols but the extras. But there is a notable difference.

Wilds can get "sticky" during the Free Spins bonus.

Exceedingly useful in improving the odds for a win. The Expander picks one symbol from the modified reel and stretches it to cover all three positions.

The kicker is that the selected symbol is the one that can complete the most-rewarding winning outcome based on what other symbols are on the remaining reels.

The green B symbol stands for Bonus. You can get 9 free spins plus 1x, 3x or 9x win multiplier depending on the number of bonus symbols.

Part of the free spins round is sticky Wilds which can land on any of the three reels in the middle.

This part of the game is triggered with three, four or five M for Mystery symbols. Depending on the number of M's, you can get 1x, 2x or 6x your bet as a win multiplier to the instant prize.

The Mystery bonus comes with four paying symbols and an X. If you hit that one, your picking adventure is over. I had a good run during this bonus, twice, chancing upon mostly yellow and blue symbols with a single green gem once each round.

Because I won it with three M symbols, the win multiplier was 1x, which means, winning outcomes were as-is. The aggregate sum was decent enough, however, and got me hoping that the next round will come about with a 4x multiplier and a highly improved payout potential.

You can try Arcader with 10p per spin. This amount lets you test the waters of this pixelated universe, check out the hit frequency of the bonus feature and similar recon details.

I tried my hand with 50p per spin to see how the Expander modifier pans out. Happy to say, there were times when a stacked reel with the help of one or two Wilds combined for a comparably notable return.

Arcader underwhelms when it comes to the symbol payouts. Landing three symbols of the same kind without modifiers or multipliers isn't going to return your full bet until the two strongest symbols (BAR and 7).

Truth be told, the Expander is quite frequent during the base game so this tends to balance things out for a time, to land you a fighting chance until one of the two bonus features.

The payout structure is as follows:

I found Arcader to be a nice little game with more extra features than I expected. Overall, I think the Expander modifier is the most important part of the game because it can lend you a helping hand on many occasions. Without it, Arcader wouldn’t be as exciting.

That said, the game can bring about decent outcomes. The potential is there, but you’d have to win either one of the bonus games with four bonus features. In other words, the 1x win multipliers don’t quite cut it, if you are looking for more than just a fun ride in the world of Arcade slots.

Browse casinos with Arcader and other slots from Thunderkick. Create an account and try the game for free before making a deposit.

You can play Arcader in English, Finnish, Swedish, Norwegian 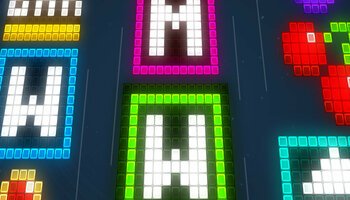