Arcane Gems is a Quickspin slot that shows us a secret little box hiding a series of different gems, which in the right combinations can create some actual magic. This slot also features sticky re-spins, paylines from both sides and multipliers that can be activated.

This slot was another game released in 2020 which was a very productive year for a lot of studios, even considering all the world events. This game doesn’t really show off everything this developer is capable of but does have some appealing features as well as an original setting. The design of this game shows a little box with the titular gems inside them, which is 3D modelled and sometimes the camera moves to give it a different view.

We find ourselves sitting next to a table, looking at the box with a 5-reel, 3-row playing field and 9 paylines. Around the box are coins, a map and a sextant as we are seemingly looking for something. The symbols in the slot are different types of gems, as well as some generic low-paying card suits. It looks okay but has almost no detail and doesn’t show off any creativity.

There’s not much I can sensibly say about the music, not because it’s bad but mostly because it’s very simple and toned-down. During the base gameplay, you’ll hear mostly distorted sound-effects, weird tunes that can be interpreted as music but might as well just be a mood board. Any wins you get are congratulated with more standard jingles though, which help ground it somewhat.

The symbols in Arcane Gems stick close to the name of the game and are variations of gems, with the low-paying card suits looking as normal but with a gem shape. It’s all pretty uninspired and you’ll easily find a dozen other slots that use the same gems as symbols. It’s kind of unfortunate because the box the game is set in gives the impression there is more going on but that is never explored.

The symbols in the slot include:

The game doesn’t have a lot of different symbols and uses a Paylines From Both Ways feature that makes getting wins a little easier. This results in the game being listed with Medium Volatility. You can expect spaced out but slightly larger wins to balance out the trouble of getting wins naturally.

Players can pick a bet between £0.10 and £100 per spin to find the risk they enjoy the most. Meanwhile, the max. win of 5,625x your bet is a good reason to keep playing even though it’s not the highest jackpot you can find out there.

Arcane Gems keeps its gameplay relatively simple and most of it stays focused around the base game. There is no free spins mode or other bonus game either.

The features in this game include:

The main feature of the game is the paylines from both sides, not because it is so important but rather because it always applies. The name isn’t exactly clear since it implies a win always has to start on the outermost reel, but really it only requires three or more symbols to be present on a win line, regardless of the starting position.

In actuality, it means a win is counted whenever the same symbol appears on a win line regardless of which reel. As long as they appear on consecutive reels, they are counted. So a win can be activated when the symbols appear on reel 2, 3 and 4, or 3, 4 and 5 as well as starting on reel 1 as normal.

Whenever a win is created, the sticky re-spin feature is enabled. This will lock the winning symbols in place, or only the highest paying symbol if there are multiple wins at the same time. Then a re-spin is triggered and any additional winning symbols also become sticky. This continues until the screen is filled or no new symbols are added.

If a reel is filled with these sticky symbols it activates a multiplier. This multiplier is applied to the total win once the re-spins are finished. This can result in a big win but I found that sticky re-spins often didn’t add a lot of extra symbols, keeping the win small.

Arcane Gems is a normal slot with generic symbols. The setting is interesting as a concept but unfortunately, the game doesn’t do anything with it. The sextant and map on the table are never explained and not given any context. I feel like this could have been something that was explored in more detail in a more elaborate concept of the game but that was never made.

As it stands, Arcane Gems is a standard game that will appeal to people that enjoy this type of game. The features are activated frequently but there aren’t a lot of them either and their volatility means that you won’t walk away with big wins very often.

This slot will probably not appeal to a lot of people. I feel like it’s too generic at what it actually offers to stand out enough. I did like the sticky re-spin feature as it activates quite often but as it is the only thing that makes it differentiate itself I doubt people will remember this slot after closing it.

Browse casinos with Arcane Gems and other slots from Quickspin. Create an account and try the game for free before making a deposit.

You can play Arcane Gems in English, Finnish, Swedish, German and 16 other languages. 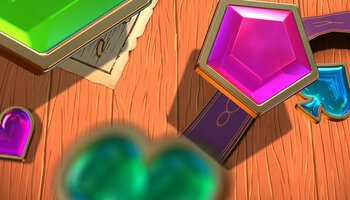