The forces of evil are on the rise and you are the only hope. Gather your heroes and fight like there’s no tomorrow.

Don Parker tried to save his company by selling an ancient talisman. Unbeknownst to him, he unleashed an ancient evil and sealed the fate of the city. The evil spirit now possesses Parker under a new identity, Deep Pockets. The spirit has his eyes on the city and no one is safe any more. Luckily, you lead a group of four heroes that can save the day with their superpowers.

Arcane Reel Chaos is the perfect comic slot. The story and the characters feel like they are pulled directly from indie comics of the early 2000’s. This slot has a total Watchmen and Umbrella Academy vibe to it.

As for the game itself, this is a five-reel slot with 20 paylines, low/medium volatility and an RTP of 96.81%. This game is perfect for grinding, as it hands out a lot of constant small wins, that hold your bankroll in place.

Arcane Reel Chaos has an amazing atmosphere. The ruined church, the flashing police lights, the sounds of the city in distress and the occasional gunshots really bring out the blight. As soon as you start the game, you get the feeling that the 11th hour is now.

The comic book style is properly made. The characters feel like they belong on the pages of a comic and the art-style is fitting. I could easily see these heroes having more adventures outside this slot.

What I would have liked to see, is some more story development while playing. It feels like the settings are well-thought, but nothing advances. You occasionally fight Deep Pockets, but even that has no effect on anything. I wish they had just added a little something to push the storyline.

Arcane Reel Chaos has twelve symbols, five high-paying characters, five low-paying card symbols, one scatter and one joker. All are done in an occult comic style.

Even though the heroes and the villain are the highest paying symbols, the wins are not that polarised. You can get a steady stream of low wins to constantly replenish your bankroll. It is a bit hard to hit a big win, but you can get a lot of playtime on this slot.

The scatter symbols will activate the free spin feature. If you get three of them on the reels at any one time, you start the spins. These aren’t your run-of-the-mill spins. Now you need to fight against the evil spirits and these spins don’t stop until one side falls.

The winnings are the dividing factor on this slot. The low volatility evens out the game, so you shouldn’t be getting long dry spells, but at the same time, you won’t get massive wins on a single spin. I like this type of slot, as I just like to get the most bang for my buck. Playtime is an important factor for me, so it isn’t that big of a surprise, that I love Arcane Reel Chaos as well.

All of the heroes have their own superpower. These powers activate at random and can alter the spin in numerous ways. The only thing you need is to get at least one of that hero’s symbols on the reels and then hope for the best. Unfortunately, these features activate rarely. I have been able to activate the free spins feature more times than any of the superpowers.

Psyop can build imaginary walls of wilds to shield you. If Psyop uses his powers, he will fill up to three reels with nothing but wilds.

Zero.x can create symbols at will. When his powers are activated, he will create new wild symbols and add them to the reels. You can get between three and five new wilds.

Flare’s superpower amplifies your wins. This power can activate on any winning spin and it will give you a random multiplier. Flare can boost your wins with a 3x, 4x or 5x multiplier.

If your spin didn’t win anything, Chrono’s powers can activate and fix that for you. Chrono will rewind time until you get a win. Each time she needs to rewind the spin, your multiplier increases by one. Maximum is a 10x multiplier.

The talisman scatters can activate the free spins. Get three of them in one spin and you get to go head-to-head against Deep Pockets himself. There isn’t a set amount of spins, but you spin until the fight is over.

Each winning spin is a successful strike on Deep Pockets, and every spin that doesn’t win is a blow on the heroes. You start with six hit points and the fight is over if you lose them all. Deep Pockets has multiple levels, and each of them has its own hit points. If you hit him enough to knock out an entire level, you get an instant prize and improve your multiplier. If you beat him on all four levels, you get a big prize.

Arcane Reel Chaos is a great game. I loved the style of it and the gameplay was right up my alley. When I first saw the comic book art style, I knew I had to try this game. I’m lucky I did, as this is a game that I will keep playing in the future.

There are a few things I would have done differently and the big one relates to the story. I liked the characters and the setting, but the story doesn’t feel like it goes anywhere. I wish there was some kind of progression in the game, even if it was just superficial.

This is a great choice for those players, who want to play for a long time or are wagering through their bonus. It is easy to keep spinning those reels, as you get back about the same amount you put in.

Browse casinos with Arcane Reel Chaos and other slots from NetEnt. Create an account and try the game for free before making a deposit.

You can play Arcane Reel Chaos in English, Finnish, Swedish, French and 11 other languages. 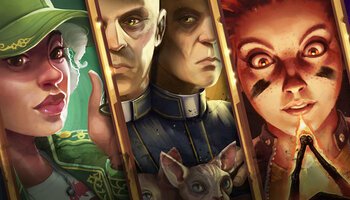