Archangels: Salvation is a divine slot where you'll find treasures both buried deep within the earth, and raining down from the sky. The main theme for this 2018 slot game is the forever ongoing battle between good and evil, and it is executed marvellously.

Although Archangels: Salvation is made by NetEnt, it does carry some resemblance to Betsoft games due to the heavy animation. One doesn't need to do anything else but to open the game, and there you'll have it. The 3D animated archangel and the fierce demon are ready to charge.

I have to admit I fell in love with the visual aspects but did I find the game itself good? The answer is both yes and no. Dare I say, the game does have a good and bad side. Snort.

The animation in this game is stunning, and it also has some seriously engaging fantasy-like music. The 3D-animated angel and demon are constantly moving, though in a monotonic way. They do get more active when the player gets a win or triggers any features. This is nice, but I think the characters would've looked better with one or two randomised moves breaking the routine.

After the release of this slot, we have had the pleasure of seeing many innovative and beautiful games. They have taught us that modern slots can be so much more than just reels and symbols; they can be legends and sagas.

Archangels: Salvation is merely a glimpse to a battle that doesn't have an actual beginning or an end. Nowadays, having played more story-driven games, it would have been awesome to be able to play this slot with a fully fleshed out story.

If you play on your mobile, you'll get the option to play either holding your phone vertically or sideways. If you choose to play vertically, then only the reels fill the screen. But, if you hold your phone horizontally you can fully enjoy the nice graphics.

If you've gotten used to a more traditional setting of a slot game, say, 5 reels and 3 rows, I bet you will be delighted. Archangels: Salvation has six reels and 12 rows, which gives us a tall and narrow play area. You'll be accompanied by the heavenly angel floating on the left side, and the sword-carrying demon on the right.

But that's not all. The game has 100 pay lines, and a bunch of possible features to activate. The 2x2 wilds in the slot can drizzle the reels with more wilds, given the 2x2 wild lands on specific areas. The game also contains a free spin feature which is triggered by landing three or more scatters on the reels.

Archangels: Salvation has two kinds of basic symbols: heavily themed and more valuable symbols, and slightly disappointing (but always an easy choice) suits. The best symbols are, of course, the angel and the demon, paying 150x your bet if you get six angels or six demons on the same pay line.

Six times a golden helmet, a lion, a red hood or a skull pays 50x your bet, and the suits go for 30 times your bet when landing on 6 identical symbols.

I have to admit that during my initial experience with Archangels: Salvation I was maybe more focused on the graphics of the game than the features. But play it yourself and you'll see what I mean – this particular slot is so pretty that I nearly forgot that I should be hunting payouts!

With some hundreds of spins under my belt, I realise that the game can be very stingy with the features and wilds. There were some nice wins, but they weren't enough to take me soaring across the skies. This left the outcome a bit bland. However, it didn't bother me too much when the game itself very successfully held me entertained.

I did notice that I preferred the Heaven and Hell features over the chance of triggering the free spins. Firstly, because they were easier to get. Secondly, these heavenly (or hellish?) features were a handy way to get some fast and nice wins.

Archangels: Salvation is an absolutely gorgeous slot. When it was first launched it had such a different style of layout from many other games. This is what made it so special to me because it was one of the first NetEnt slots really breaking the traditions.

I did, and I do, enjoy this slot still. It has its own charm and the special features are exciting when one's lucky enough to trigger them. So, which one will it be for you... Heaven or Hell? Good or Bad? Which one will you be rooting for?

Browse casinos with Archangels: Salvation and other slots from NetEnt. Create an account and try the game for free before making a deposit.

You can play Archangels: Salvation in English, Finnish, Swedish, German and 20 other languages. 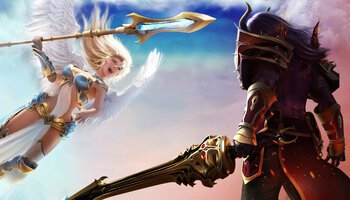