You don't need to become Elon Musk's friend in order to catch a glimpse of the grand infinite. You can do that by playing Betsoft's Arrival, a game of 30 paylines based on a story of space exploration, filled with action and drama, as well as three bonus features and decent payout potential.

Initially, I liked the game and I think that the graphic design is extremely cool. I played it once and couldn’t get enough of the alien vs human theatrics. If you’ve seen the movie Mars Attacks you will recognise where Betsoft got its inspiration from and I suspect there may be an admixture of Spaceballs in Arrival too.

The mechanism behind the screen can make your time with this game interesting enough and there are three bonus features in which the odds and the RTP are elevated. Which isn’t the case with the base game. The bonuses can make it worth riding along with the ecstatic visuals, however, not all bonuses have been made to trigger on equal terms, so you need to make some more time before the best bonus arrives.

In my experience with the game, I won a little bit over 500x my payline bet in the pick-me bonus and had a chance to experience the wild reel at work during the free spin bonus, so there are some impressions weighing down on whether you should take off on this rocket and chance your encounter with Zarbon.

The title "Arrival" suggests otherworldly creatures visiting our planet, however, the game seems to be taking place onboard a space-travelling vessel that is commanded by a brainy alien who is wearing a NASA-style space costume and goes by the name Zarbon. So it makes me wonder who is the visitor here because I don't see the two eartheans on deck, so it seems as if they are the ones with an interstellar curiosity for alien meat.

I found Arrival to be well-made, with attention to detail and big, bulky 3D symbols composed of alien beings, humans, robots and lethal space gadgets, among few other things. The symbols are fully animated, as is the case with other Betsoft games like Viking Age and Mamma Mia!, so there is enough action that can render void any encroaching boredom.

Sadly, "Ground control to Major Tom" doesn't resound in this space ship as part of the soundtrack, however, the music that comes with the game is definitely worthy of being preserved in a time capsule destined for outer space.

Most slot games made by Betsoft between 2010 and 2012 tend to have three or four features and Arrival is no exception. I was glad that I can try my chances on three features which are rich in diversity but lack win multipliers.

I don’t think Arrival has a big win potential because the free spins bonus is a one-time-per-pop thing. (Couldn’t catch a glimpse of Zarbon’s scatter). But the other features make it possible to land a few big wins that are worth celebrating about.

I most liked the pick-me bonus. It triggers more frequently than the main Bonus and it can bring-in decent prizes. The bonus invites you to select one of three ray guns on the screen.

One of the guns always contains the Collect outcome where you get your aggregate payout, but as long as you keep hitting the money-gun, you’ll remain in the game. I won 500x my payline bet, but I can easily see how this bonus can extend the scope of the winnings by keeping back the Collect option.

This feature substitutes for a proper free spins bonus. I say that because you don’t get too many spins from the game and only a handful of spins at it. Landing three of the brainy alien symbols opens up a sticky wild reel and a low random number of free spins. I find this to be the weakest bonus feature, first because the wild reel is at the end of the reel set and secondly, because the bonus doesn’t retrigger.

The most lucrative feature of the game puts you in the role of the marine and your job is to select four out of six buttons. Four of these buttons are “good” and release one of the electric charges that keep the she-marine captured inside an orb. If the game is kind enough to work against the alien being, you hit three or four charges and make with a good bonus payout.

As I said, you can't expect much from the payouts in the base game, which is why three bonus features are better than one. Either of the features can result in bigger winnings, but I still think the pick-me bonus is the best of the game.

Arrival lacks the type of ingenuity that adorns contemporary slot games, especially those that are made to surpass the average experience. I'll admit, the graphics are intriguing but the mathematical model is so 2010, lacking any in-game modifiers. Sure, three features sound good enough, but one of these is just weak and the other one (Main Bonus) is rarely seen.

Overall, and just for kicks, you can play Arrival once or twice. The game has the potential to tickle your interest, but it fails to deliver. The RTP value is in my defence because Arrival can only do 92.26% and that's way below the average.

Browse casinos with Arrival and other slots from Betsoft. Create an account and try the game for free before making a deposit.

You can play Arrival in English, Finnish, Swedish, German and 21 other languages. 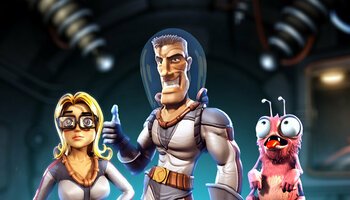