Artemis vs Medusa pits two Greek legends against each other as they go out to hunt a series of mythical beasts, while the player gets to watch the results. The slot this all happens on further includes free spins and wilds to help the two warriors along.

This game was developed and released by Quickspin in 2020, giving the player a standard 5-reel, 4-row playing field to play with and a collection of both high- and low-paying symbols. While Greek mythology is a popular subject for a lot of slots, this time the game focuses on a rarer combination. While everyone will be familiar with Medusa and her ability to turn people into stone by a mere glance, Artemis is a little less well-known as the Goddess of the Hunt.

With 1,024 paylines the game offers players plenty of opportunities to get a win but this is adjusted by the features and the fact that most payouts will not be very high. In my experience, players get a regular number of wins but they won’t often make back their bets. For that, they’ll need a special win during the free spins mode or get Wilds in the right place on the screen.

As for its appearance, the game does look fine with some original art. Even though the low-paying symbols aren’t terribly original as coloured gems they don’t distract from the setting as much as card letters or suits would have. The high-paying symbols mostly consist of monsters and the two protagonists and these do look great, drawn in a semi-realistic style.

Artemis vs Medusa does its best to bring the setting to life with a special background and some unique symbols. The different symbols are easy to tell apart, both by their design as well as through the use of colours. Wins are clearly signified with lit-up tiles as well as a sum total of the coins won.

The game has low payouts for all the different symbols with even the biggest payout not being terribly impressive. With its High Volatility, the game expects players to hit the free spins mode, which can last forever according to the paytable. The players that want to try out the slot while taking an acceptable risk can choose their bet between £0.20 and £100 per spin.

For the few people that get to see the jackpot, the max. win of 5,286x your bet is quite a sizeable reward but it won’t be easy to get it. Obviously, players can still get big wins that aren’t the jackpot and will be a very nice boost.

Artemis vs Medusa comes with a small but impactful number of features, with the free spins mode deserving additional focus. Players will likely not require a lot of extra information to understand how they all work, but it’s still nice to have an overview:

The base game will be rather simple and I doubt any players will struggle with understanding how it works. A nice addition to the game is the Monster Bounty mechanic, where a high-paying symbol can randomly come with a coin showing on it. These symbols will award a direct coin win if an Artemis symbol appears on reel 5. Every single symbol with a coin will pay out a set win, not requiring it to be on a win line.

I found this to trigger every so often but I wouldn’t consider it a very common or lucrative mode. It really feels like this is a way to give players some more to see during the base game next to the usual Wilds.

The free spins mode puts a bit more effort into the way it works, even though players won’t have to do a lot. When the player gets 3 bonus scatters, which only appear on reels 3, 4 and 5, the free spins mode starts.

The playing field will change slightly, showing Artemis facing off against Medusa. When the game awards high-paying symbols win, Artemis will slay a number of monsters. If she fails, the monsters will advance on her. If Artemis manages to kill all of them and defeat Medusa, the free spins mode awards a big win and ends. Similarly, if the monsters reach Artemis, the free spins mode also grants the player a win and will bring the player back to the base game.

Artemis vs Medusa is a nice-looking slot that really doesn’t try to do much in terms of originality. The game looks good, with the design being consistent throughout if a little static. I did like the different character designs but they could perhaps use some more animations to bring them to life.

The free spins mode has a cool looking fight diorama at the top of the screen which gives us some movement and some action which I really liked. It also visualises the fight between the two characters and shows how close the player is to win. This mode can arguably last forever but I would see it last about dozens of spins.

I thought the game was a pretty fun distraction, offering players the standard gameplay experience that most slots have. You won’t have to spend very long getting used to the mechanics and even the free spins mode does not challenge the player. However, the possibility of winning big will probably appeal to a number of people.

Play Artemis vs Medusa for free

Browse casinos with Artemis vs Medusa and other slots from Quickspin. Create an account and try the game for free before making a deposit.

You can play Artemis vs Medusa in English, Finnish, Swedish, German and 24 other languages. 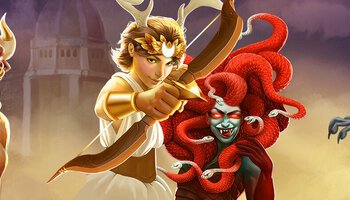