Asgardian Stones is a Netent slot that brings us face to face with the home of the Norse gods. Maybe divine intervention is just what we need! Join me as I venture out to see what this slot shapes into.

Asgardian Stones is set across the usual 5 reels framework with up to 20-paylines and the mythological world of Norwegian folklore. We aren’t dealing with any of the famous gods directly. Instead, we see their faces carved into the stones we’re playing with. If you have any knowledge of Norse mythology I’m sure you’ll recognize a few of them.

If you’re familiar with Netent slots, Asgardian Stones might remind you of Gonzo’s Quest. That slot came out in 2011 and is one of the most popular games in their portfolio. It uses the same idea of dropping stones instead of spinning reels. Both also have mythological locations as their setting.

While Gonzo’s Quest has an undeniable charm that Asgardian Stones lacks, putting the two side by side shows me how far Netent has come. The graphics are nicer, the sound is better developed and the features are better integrated. Is it more fun? That comes down to personal preference.

Since this is a Netent game it has quite a lot of features to go over so let’s get into the thick of it!

Netent does not disappoint with Asgardian Stones when it comes to the details. Even the card symbols have been designed to fit the aesthetic, with the Ace symbol made up of two ravens and the Queen symbol as a snake eating its own tail. These are things fans of Norse mythology might recognize as references to classic myths.

As far as animations go, this game is also a feast for the eyes. Even when not actively playing I can see particles bubbling up from below as if there’s a magical pond underneath the stones. The multiplier stone floats quietly to the side. Clicking on the ‘Spin’ button drops the stones with a notable weight. The faces on the stones are subtly animated with humming gems and glowing eyes, to name but a few examples.

Turning on the music I’m treated to a mysterious, otherworldly soundtrack that reminds me that I am overlooking a lake with Asgard far into the distance. The water laps up softy, birds chirp and the sound of a thunderstorm booming in the distance all add to the mythical atmosphere.

Clicking on the Spin button rudely interrupts the silence with rumbling and heavily dropping stones. An aetherial ring sounds when you get a win, plus a more substantial soundtrack when you activate one of the special features.

Even though I’m massively impressed by the look and feel of the slot game, let’s delve into the gameplay features.

The symbols are relatively simple even though they look great. From the highest to the lowest value they are:

When playing there are several features to keep an eye on:

The first three features show up often enough and work well together. I had a few times where an Avalanche would trigger a Colossal Symbol, which triggered a Colossal Crush and made my next win a lot bigger with the added multiplier.

I can’t say the same about the Bonus Wheel, unfortunately. It was extremely rare for it to show up and even then there is a less than average chance you’ll get any free spins out of it. Even though it was basically a free win, the fact it showed up so rarely did sour my opinion of it.

Thanks to its many years of experience Netent really knows how to build slots and it shows with Asgardian Stones. The graphics and animations are top tier. The sound design, which usually seems to fall to the wayside with most developers, also deserves extra credit.

The game feels a little bloated with the features and although they don’t interrupt the gameplay I had to read through the information screen to understand their exact function. The Bonus Wheel was maybe the biggest downer since it added very little to the game experience and when it did show up it was rather disappointing.

However, that’s just nitpicky and I would heartily recommend this game to anyone who is looking for a modern slot that builds on the classic slot experience.

Browse casinos with Asgardian Stones and other slots from NetEnt. Create an account and try the game for free before making a deposit.

You can play Asgardian Stones in English, Finnish, Swedish, German and 20 other languages. 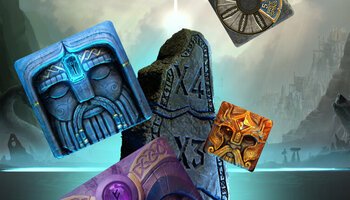