At The Movies slot review

Play At The Movies

Being At The Movies doesn't always mean that you'll watch a great film because this Betsoft game definitely gets the slots equivalent to a Golden Razzie Award.

At the Movies makes a showing of an idea that's gone completely amiss. Whoever thought up the premise and the symbols for this game has gone all over the place.

I get it that the theme is all about movies, but filmophiles will find little to rejoice thanks to the uninspiring choice of symbols.

And as if the general look and feel of the game aren't bad enough, the features are even worse - because there are barely any.

You can play At the Movies and hope for the free spins bonus to trigger sooner than later. Until that moment, the lacklustre base game will leave you wondering why didn't Betsoft include at least one reel modifier to make the scene more engaging.

There is one thing that I can admit is positive about the game - the fact that its 3x5 layout and 20 paylines are at least consistent in posting frequent low-paying combinations.

Betsoft's graphic designers had treated At the Movies to their full array of animated effects. Some of them are cool. They get credit for animating the various objects that are quintessential to certain movie genres and moviemaking in general.

The carnivore flower shaped like a mouth makes for a truly scary performance and the spaceship on the parched terrain of a distant planet does reminisce of Star Wars - except it doesn’t because its take-off looks like. Oh, and one of the symbols is a Brad Pitt lookalike. Now, how about that!

I am not going to get into the audio part of the "experience" because it's horrendously bad. Sorry, At the Movies, really so sorry.

The only thing that At the Movies can offer in the base game in terms of extra features is the win-doubling Wild symbol. Land two or more matching symbols on the same payline together with a Wild and your winning outcome will be paid 2x its value.

But, in another tragic turn of events for At the Movies, the Wild can only appear on reels two and four. I would have given the game the benefit of a doubt if the Wild were able to land on any of the five reels, but that's not going to happen.

The scatter/bonus symbol is represented by a reel-based movie projector. That's so, um, 1990's. Anyway, you need three, four or five scatter symbols in exchange for 8, 12 and 20 free spins. The only plus about the bonus game is that you get a 2x win multiplier by default. Another set of scatters retriggers the bonus. That's it. And now the black screen with the credits.

Players can select the number of active paylines on this game by fiddling with the settings menu. The game has coin values between one penny and one pound per payline, as well as five betting levels for those who'd like to up the stakes.

One detail that may offset my overall bad perception about the game ever so slightly is its ability to pay for two matching symbols. This is, however, exclusive to the high-paying symbols.

In other words, two of a kind from this category and a wild can amount to winning outcomes between 50x and 200x your payline bet. As I said, it's only a small plus.

The only thing about At the Movies that stands out in a positive sense is its maximum payout potential of more than 7,000x your bet. Any outcome that goes past the 100x your bet mark has to come through the free spins bonus, with plenty of doubling Wilds substituting for high-paying symbols.

These “freak-accidents” can occur even in games that don’t have any other features besides a free spins bonus. That said, the game is better left alone as it can offer little entertainment and lukewarm payouts.

Play At The Movies for free

Browse casinos with At The Movies and other slots from Betsoft. Create an account and try the game for free before making a deposit.

You can play At The Movies in English, Finnish, Swedish, German and 22 other languages. 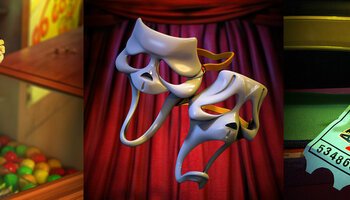