Atlantean Gigarise is the game that brings us deep under the ocean into the ancient city of Atlantis. Here we are greeted by impressive sights of temples and buildings while we play on a non-standard playing field with free spins and expanding reels.

The game immediately jumps out at the player with its unique visuals. The background shows us that we’re deep underwater and that we’re in the middle of Atlantis. The buildings are mostly temples but there’s also a strange-looking spire. This lends to the idea that the Atlanteans were an advanced civilization before, or after, they sank under the waves. The game further features a 5-reel, 3-row playing field that can expand up to 8 rows high.

Developed and released by Yggdrasil in 2021, players can be assured of the visual prowess of the game. There aren’t a lot of animations though, and most of the images we see are static. There are some nice details in the background such as bubbles drifting up or a school of fish swimming in the distance. When there’s a win on 1 of the 2,520 paylines, we simply see the winning symbols light up.

When playing the game there is a subtle song playing in the background that does fit the setting well. It features some classic instruments and makes it sound like we’re in a classic story. The sound effects include loud jingles when there’s a win, but the rows spinning is made to sound like bubbling. Other effects also help with the idea that we’re deep under the ocean.

Atlantean Gigarise uses a pretty simple selection of symbols. The low-paying symbols are card letters that are made to look like they are somewhat related to the ocean. It’s difficult to give it an Atlantean look and I appreciate the effort. At the end of the day, card letters still don’t make a lot of sense in the context of an underwater city. The other symbols are more related but still very simple.

Because of the large playing field, the symbols also don’t get a lot of room to show off their details. As a result, they’re rather small and unimpressive. There also aren’t any animations hidden in the symbols themselves, even when part of a win. They simply light up briefly before the game continues.

Players will be playing a slot with Low Volatility, which results in rather frequent wins but usually only for a small number of coins. As a result, I found my funds drop slowly since the wins barely compensated for my spins. Players can change this somewhat by adjusting their bet to between £0.20 and £40 per spin. There is also a jackpot of 15,000x your bet.

The symbols in the game include, from most to least important:

Atlantean Gigarise has a number of different features as can be expected from a Yggdrasil game. The main one is the Gigarise feature but there are more:

The main game is largely the same as what we’d expect from a regular slot. The playing field is bigger and the Gigarise feature causes the reels to grow, but other than that it works in a familiar way. Players will get more ways to win as the reels continue to grow because of the consecutive reels feature.

If a reel hits the maximum length, it will trigger the bonus game. During the bonus game, all symbols are removed and only multipliers, free spins, and a jackpot can appear on the screen. The middle row is highlighted and anything that stops on that row is awarded. Players have 3 spins to get something on the middle row. If they do, it resets back to 3 spins. If they run out of spins, the bonus game ends.

The free spins mode can be activated through the bonus game or when getting scatter symbols on the screen. This mode starts with a 5-reel, 3-row playing field but with every spin one reel will expand.

Atlantean Gigarise is a pretty-looking slot although it misses some of the creativity that I’ve come to expect from Yggdrasil. Everything looks good but there are only a few animations and no real cinematics or characters that liven up the game.

I think the low volatility will be the biggest disappointment for a lot of players. Even when hitting the free spins mode, activating the bonus game a few times, and getting extra free spins, I only won 30x my bet. This seems a small pay-off considering the effort it takes.

Browse casinos with Atlantean GigaRise and other slots from Yggdrasil. Create an account and try the game for free before making a deposit.

You can play Atlantean GigaRise in English, Finnish, Swedish, German and 18 other languages. 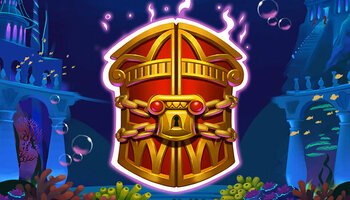