Atlantis is a slot that takes us to the mysterious hidden island that has been a source of inspiration and frenzied searches for generations. With thousands of bet lines and amazing visuals, the slot promises a thorough examination of this mythical place.

This slot was released in 2017 after having been developed by Evoplay Entertainment, who have been working hard to make a name for themselves. Over time, there have been several of their slots that have shown amazing graphics in creative settings and Atlantis has been a prime example of this for me ever since they released it. The game has an atypical 6-reel, 5-row playing field with a massive 15.265 betlines. This translates into a win whenever a symbol appears anywhere on consecutive betlines from left to right.

The game is set on the island of Atlantis which isn’t submerged in the ocean as it’s often portrayed but seemingly lost somewhere on the island. The background shows us a view of this island covered in the moonlight with some details that show us this isn’t a regular old city. In the corner, there is a floating ornament and in the other corner, we see a magical fountain that keeps track of the free spins symbols we collected.

I thought the game was really beautiful, not just the background but also the individual symbols as well as the many animations in the game. There are several characters in the slot that play rather sizable roles in the features, and as a 1x3 symbol, they’re given room to shine.

All the symbols in Atlantis are unique and made to fit the slot, even though I don’t fully understand their role. What I did like was the colour association between the low-paying symbols and the characters, which I will get into under the Features header.

Because of the 15.265 betlines, counting the symbols works slightly different in Atlantis than in most other slots. Here, the game requires the same symbol to appear on consecutive reels from left to right. However, the slot doesn’t count the number of reels but the number of symbols. If there are more than 7 of the same symbol on consecutive reels it will count as a win. Since 1 reel can have 5 symbols on it, that means that with only 2 reels it can already have enough symbols to reward a win.

Since this mechanic makes it more likely to get a win, it has a Low Volatility. Still, all but the lowest 3 symbols don’t make back their original bet if you get the minimal amount of tiles to get a win which I thought was pretty good. It meant getting any win was very likely to at least recover your bet.

Atlantis has a few features that are hidden behind the Free Spins mode, making that part of the game very important for any big wins.

During the base game, the best thing to happen is for a stacked symbol to appear. Any stacked symbol not only starts the re-spins but also makes symbols with the same colour count for a win. This means that for each character there is a colour and there is a normal symbol associated with that colour as well.

With the connected symbols, it’s easier to get bigger wins. I saw the stacked symbols appear semi-regularly, with on occasion even more than two at a time. This could result in almost a dozen re-spins in a row, but I wouldn’t count on it being a regular occurrence.

It’s too bad the Wilds aren’t part of the base game and only appear during the free spins mode, but I did like the fact they are added after the spin is completed. This can sometimes have the effect that they amplify an existing win or create a win where there wasn’t one before.

Atlantis by Evoplay is a beautiful slot with an interesting setting without going too deep into details. In my head, the five characters are explorers that set foot on Atlantis for the first time in centuries but none of that is made explicitly clear in the game. It creates a fun extra layer into the slot without actually adding it.

The game has a few features that make it interesting for modern players but they aren’t so special or bizarre that they’ll turn off casual players. If you like a game that looks nice and isn’t quite a regular slot but close enough, I think you’ll have a good time playing Atlantis.

Players can choose a bet between £0.10 and £500 per spin which is a lot of flexibility. If you feel the low volatility can go your way you can pick a larger bet. If you prefer to play it safe, keep your bets small. Either way, there is a max. win of 1.803x your bet to look forward to.

Browse casinos with Atlantis (Evoplay) and other slots from Evoplay Entertainment. Create an account and try the game for free before making a deposit.

You can play Atlantis (Evoplay) in English, Chinese 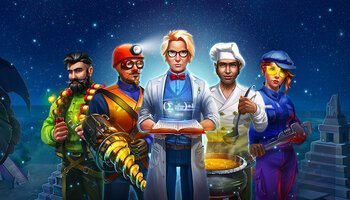