Atlantis Megaways is a brand-new Yggdrasil slot that dives deep into the ocean where Poseidon rules the sunken city of Atlantis with an iron fist. Cascading Reels, Re-Spins and a lot of sea animals are going to either keep us from or help us with finding its hidden treasures.

Developed by the veteran studio and released in 2020, Atlantis Megaways seems to be a sign of the new direction that Yggdrasil has taken with their slots. Where their older games feature a lot of animations, an intricate intro and a number of original characters, Atlantis Megaways feels like a simpler, more direct slot. The game instantly drops you into the 6-reel playing field with a varying number of rows per slot and immediately lets you get started.

Because the number of rows per slot can change a lot, the game potentially has between 64 and 117,649 win lines that players can win on. Players don’t require the same symbol to appear on a literal win line, it just has to appear on consecutive reels from left to right to count as a win. The symbols that are put in this game relate to the Atlantis theme, from different fishes and Poseidon himself to card letters that are wrapped in seaweed and coral.

It all looked fine without really blowing me away. The drawings are sharpy and hand-drawn but they feel very similar to the symbols that you’ll find in any of the other Atlantis-themed games. The symbols also aren’t very heavily animated, playing a brief little zoom effect before dropping away or a new spin starting.

The symbols in Atlantis Megaways look good and are easily distinguishable. There are quite a few of them, which is part of the reason the game ends up with High Volatility. The game doesn’t allow as much flexibility when picking a bet as other slots, with players being able to pick between £0.20 and £25 per spin. Meanwhile, players have a shot at a max. win of 8,641x their bet which is pretty big compared to other slots.

Atlantis Megaways has a few different features but the varying size of the playing field is the biggest draw and also the biggest factor while playing. The total features include:

Almost the entire game will take place in the base game since the re-spin mode is extremely difficult to reach. The fact it requires 6 Scatter symbols might seem like a small task given the maximum number of reels and rows that the game might have, in actuality the playing field will usually be smaller. This makes it a lot more unlikely that the game will have any more than 1 or 2 Scatter Symbols on the screen at a time.

The idea that every reel has a varying size is a pretty fun concept but I found it rather confusing to see and it took my brain a while to catch up. It’s possible for reel 1 to have 2 rows while the next reel has 7, then back to 2, then 3, etc. It means that some reels only have a few symbols while the next might have all of them.

It’s theoretically possible to get easier wins that way: if the first reel only has 1 or 2 symbols but the next has all of them, that will help in creating a winning payline. The problems are that it almost never worked out this way, and even when it did, the payouts were meagre. I found myself steadily losing coins as I played without even betting very high.

The Wilds only appear on the top row but they did help with creating wins now and then. Something to mention is the separate row at the top of the screen which is showing you which symbols will be added to the screen with the cascading reels feature. It’s pretty pointless but I suppose it might come in handy occasionally.

All in all, I found the features to be rather messy and only add a limited amount of gameplay to the actual slot. The game feels like its overly complicated without actually offering a benefit to the player. I never felt like any of the features were really helping me get a big win, and with the high volatility and low payouts, this feeling was further amplified.

Atlantis Megaways feels like a slot developed by someone other than Yggdrasil. Where their older slots often seeped in style and details, this game feels rather bland and simple. The only thing to set it apart were the features but these were difficult to understand and come across as feeling unnecessary.

The jackpots aren’t really jackpots by themselves but different sized multipliers that can be applied to the coins you gathered during the re-spins mode. This means even the largest, 2,000x your bet jackpot might only be applied to a tiny coin win. I doubt that would feel good for the person winning it.

If you’re looking for a slot with the varying size of its playing field, Atlantis Megaways might be an interesting experiment. I don’t think I would recommend the slot to other people as the gameplay just feels too random and unfocused to be useful, and there isn’t enough creativity to keep people interested.

Browse casinos with Atlantis Megaways and other slots from Yggdrasil. Create an account and try the game for free before making a deposit.

You can play Atlantis Megaways in English, Finnish, Swedish, German and 15 other languages. 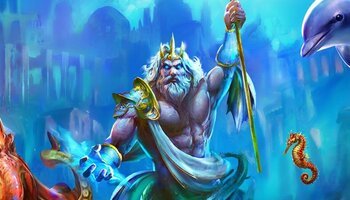