Aztec Gold Megaways takes another shot at the popular Aztec culture as a backdrop. The game includes some excellent graphics that capture the theme well while giving players a variety of features to enjoy such as cascading reels, sticky re-spins and 3 jackpots.

Originally developed and released by iSoftbet in 2019, Aztec Gold Megaways makes sure to immerse players into a stylized but interesting-looking slot using the Aztec civilisation. The game features a rather large 6-reels slot with the Megaways feature, meaning that every spin all reels will have a random length between 2 and 7 rows high. As a result, the game can have anywhere between 729 and a whopping 117,649 paylines on the screen at the same time.

While the game draws from Aztec culture, this is done in a stylized way where the graphics are sharp and angular, as if from a comic book. There is a lot of colour being used with gold being the dominating one. In the background, we can see the edges of an Aztec temple while the jungle grows behind it. On the reels themselves, we find a mix of characters, animals and card letters as the low-paying symbols.

When it comes to the sound, the game opts for a rather toned-down experience. The music fits the Aztec and jungle setting, keeping the soundtrack based around drums and panflutes. There isn’t really any change in music as any of the features are triggered though. Sound effects that are used include animal sounds, chants and things you would hear in the jungle.

Aztec Gold Megaways is not extremely original when it comes to its appearance, even though it all looks good. The low-paying symbols are card letters in gold with gems embedded in them. Even though they are all created for the slot, their appearance itself is what breaks immersion for me. In sharp contrast, the high-paying symbols are original drawings of jungle animals and an Aztec priest. These look way better.

I am always amazed at how any studio decides to go with the standard card letter when there is so much inspiration to draw from. If I had to venture a guess, it is to quickly inform players which symbols are the ones to aim for, and those are specifically not the card letters. As is the case in any slot, the card letters are the ones with the lowest payout.

When talking about the payout, I have to address the High Volatility that the slot comes in. There are a lot of symbols with low payouts, and the features are pretty rare which make it unlikely that they will help create any wins. As a result, players will have to play for quite some time to get any win, let alone a big one.

To deal with the volatility, players can pick a bet between £0.20 and £20. Although the maximum bet isn’t as high as in other slots, the game does offer a max. win of 19,200x your bet which is obviously very sizeable. On top of that, the game also offers 3 different jackpots that can be won during the bonus game.

Aztec Gold Megaways uses some simple but effective features that will either trigger every spin or will be almost invisible and very hard to trigger. They include:

The Wilds, Megaways and Cascading Reels trigger often, with any win causing the winning symbols to drop away and be replaced with new ones. During my time playing, these wouldn’t often create large wins. I also noticed a quick and seemingly inevitable drop in funds that never felt like it pulled out of a nosedive.

In contrast, the re-spins feature was extremely difficult to enable and it took me the better part of an hour to even see it once. Its effectiveness was also severely lacking as it did not offer a big enough win to compensate for the coins that I had lost. As a result, its high volatility did not feel rewarding at all.

Aztec Gold Megaways looks great and has a nice feel to it. I like the art direction and the way the theme is implemented in the slot. There is plenty to see, and the music is good at keeping your attention as well.

I’m not as complimentary about its features, as they have been done in other slots in better ways. The game offers no real unique combination of these features, simply adding the 3 jackpots as an incentive to keep playing but hiding it behind the re-spin function. This re-spin feature proves impossible to enable, and will likely only be seen by those that have the means to keep playing for hours on end.

Even then, its appearance will not be guaranteed to trigger any big wins, so keep that in mind when you decide to invest your time and coins. The features work well but they are simply not effective enough to feel rewarding.

Browse casinos with Aztec Gold Megaways and other slots from iSoftbet. Create an account and try the game for free before making a deposit.

You can play Aztec Gold Megaways in English, Chinese 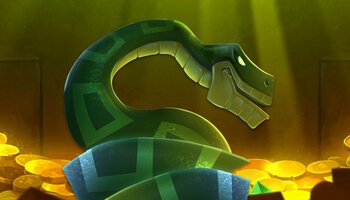