Aztec Idols sets us on a daring adventure for Aztec treasure accompanied by a rugged explorer. These type of settings are my favourite so I’m excited to see what’s in store!

Released in 2012, Aztec Idols can be considered a little old-fashioned compared to the newer slots. It does sport several modern features that a lot of players might find interesting. The graphics and sound also hold up nicely.

Over the years, a lot of developers have used Aztec culture as a backdrop for a slot. Play ‘n Go decided to put their own spin on it. Helping me explore this ancient culture is Rich Wilde, an Indiana Jones-type character that has been helping Play ‘N Go with their adventures before.

You might be familiar with his work when he investigated Book of Dead, the Shield of Athena and the Tome of Madness. Aztec Idols was his first adventure though and it does show in some ways. He’s barely used in the slot only acting as a Wild which I thought was a shame. In the newer slots, he takes up a bigger role!

I think the type of setting works well with the mechanics they chose because it feels like I’m in search of something.

Some of the graphics and animations are dated but it continues to look good enough. The sounds are fitting and as the game plays the music picks up or slows down.

Aztec Idols has 5 rows and a total of 15 paylines to play with. The rows are filled with a series of symbols, about half of which are card symbols. The others are specifically designed for the game.

Before I list them all I should note that the Wild and Masks are special. These symbols award you coins even if you only get 2 of a kind on a payline!

The symbols and their value are, from highest to lowest:

That’s not all! There are two other symbols in the game, namely the Golden Aztec Temple and the Golden Coin, but these trigger special features that I’ll discuss next.

The Aztec Temple is a nice bonus game that’s not too complicated. It treated me with a quick cutscene that set the scene, entering one of the temples and finding the 5 golden statues. Choosing the gas first is pretty disappointing though since this bonus game didn’t trigger for me often.

In fact, I only saw this bonus game pop up only twice. The first thing I clicked on contained the green gas, ending the Bonus Game immediately. Because it’s such a simple addition to the game I don’t believe it’s important for any big wins, however.

That’s where the scatter symbols and free spins come in. The combination of a random number of free spins with a random temporary Scatter Symbol means that there is a real possibility of winning a lot of coins.

It’s possible to get between 10 and 20 free spins this way. After this, the game continues using the free spins you won. The twist is, the symbol that acts as a temporary Scatter symbol will expand to fill the entire reel when you get two or more of them on a payline. This can quickly result in having most of the screen filled with the same symbol!

This part of Aztec Idols actually activated quite often for me so I felt it was worth it to keep playing in order to hit those free spins. The game’s high volatility does show this way, as regular wins pale in comparison.

Aztec Idols is an older slot that has lost some of its shine over the years but it still keeps up well with the newer games. Having a character as a focal point makes it a lot more relatable, letting me feel like I was actually exploring the Aztec temples with Rich Wilde.

At its core the slot is simple, not changing the classic slot experience too much. Once either of the bonus features shows up it does kick things up a notch. I was especially interested in the Aztec Calendar which appeared regularly and gave the game extra excitement.

If you’re looking for a slot set in an exciting environment with some simple but interesting features I suggest you explore Aztec Idols!

Browse casinos with Aztec Idols and other slots from Play'n GO. Create an account and try the game for free before making a deposit.

You can play Aztec Idols in English, Finnish, Swedish, German and 30 other languages. 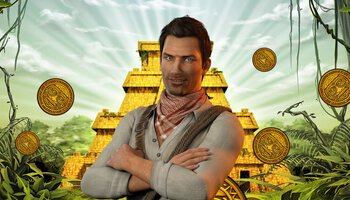