Aztec Spins is a slot that’s set in the past when the Aztec Empire was at its height. The game features a collection of features including Pays Both Ways, Free Spins and Sticky Re-Spins.

Created by Red Tiger and released in 2020, Aztec Spins is a good example of what this developer is capable of now. The slot has a 6-reel, 4-row playing field that is populated with a mixture of original and standard symbols. In the background, we see the giant bonus wheel that we might activate later while beyond that are the shrouded shapes of different buildings.

The game has a nice look to it, even though the Aztec symbolism is very popular among developers. The symbols can be divided into high- and low-paying symbols, with the high-paying ones resembling Aztec masks and buildings while the low-paying symbols are simple card letters. Unfortunately, there weren’t a lot of animations in the game. Instead, it focusses more on a high pace.

Even though Aztec Spins has 30 paylines and a Pays Both Ways feature, the game still has a listed High Volatility. There is a notable difficulty in getting a win, especially during the base game. I found that without the aid of any special features, it was very rare to get a random normal win. As a result, my funds were subject to a pretty steady decline.

The symbols in Aztec Spins are either based on or modelled after the Aztec civilization. The low-paying card letters are unfortunately a big detractor of the mood and style since they are only slightly modelled after Aztec symbolism. They are still generic letters, except with some Aztec reminiscent shapes on them.

When there’s a win, the symbols involved usually only hop up a little bit. Some of them have a brief animation like some fire-spewing but most of them do nothing special. Even though that’s expected from a slot with a high pace, it still feels like there is something being left out.

Aztec Spins gives players a wide variety of different features that augment the gameplay. The main features include:

The most obvious feature and the one that is active the entire time is the Pays Both Ways element. This does nothing complicated, it simply allows paylines to start from the rightmost reel as well as the usual leftmost reel. It still requires the same symbol on consecutive reels but it technically helps in creating wins.

In my experience, the volatility of the game was so high that even the Pays Both Ways feature did little to facilitate wins. Even so, it was exceedingly rare for a payline to include more than 3 symbols. The feature seemed mostly to exist for the special features, where it was more impactful and created more wins.

The Bonus Wheel stands tall in the background of the game and is seemingly randomly triggered during the base game. When it is activated it will spin to reveal one of the features on it, that are activated immediately.

I found the Free Spins mode to be the most beneficial to getting wins, in part because of the free spins themselves but also because they make it more likely for the Wheel to spin again. Technically, this could result in getting locked symbols and/or the stacking multiplier at the same time during the free spins mode.

Considering the high volatility of this slot, I assume that those are the moments where players can win their funds back. The max. win of this slot is 4,983x your bet with the possibility to choose a bet between £0.10 and £20 per spin.

Aztec Spins is one of Red Tiger’s newest slots and they have made sure to put a lot of features into it. The game plays fine, with a high speed and interesting things to look at. Unfortunately, I found the features to be pretty rare and as a result, the high volatility felt really punishing.

As I played, the game did drain my funds rather rapidly so I would advise any players to start with some low bets before increasing. I never felt like I was close to winning the jackpot, nor did I ever get any really big wins either. The result was shrinking funds without much prospect at coming out on top.

This slot will probably be a good fit for casual players that enjoy some extra features but aren’t looking to win big. The high volatility feels like a detriment and I would warn of caution before betting too high. Still, it was a fun and relaxing experience thanks to the graphics.

Browse casinos with Aztec Spins and other slots from Red Tiger. Create an account and try the game for free before making a deposit.

You can play Aztec Spins in English, Finnish, Swedish, German and 18 other languages. 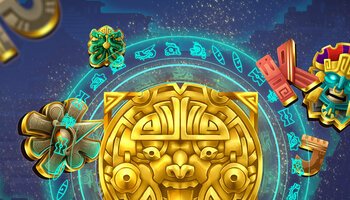