A jolly shaman is the head honcho of an Aztec city where players can bring their wagers and play for a chance to win cash prizes. Not surprisingly, the name of the game is Aztec Treasures and it was made by Betsoft in the distant 2013 when slot games were a tad simpler than they are today.

But simple doesn't have to necessarily mean bland. I didn't find the game to be particularly thrilling but also, it was hard to overlook the sheer number of bonus features that can shake out some yummy instant payouts.

Aztec Treasures comes with 30 paylines, but that number isn't fixed and you can select fewer to play on if you wanted. That would impact the bet amount, which can range between 30p and £150.00 per spin if you decide to play the full number of paylines.

Slot players who are into big thrills, by way of high variance mathematical models, aren't going to find Aztec Treasures particularly stimulating. On the other hand, those who can relish a low variance game are likely to have more fun because the game is consistent with its small payouts which, at times, can tip over to medium and big.

At any rate, the game is not to be easily discarded in the "ancient history" bin of slot games. If you are nostalgic about older slots, this one can comfortably qualify as "old but gold".

The premise isn’t new or previously unseen, however, Betsoft has done it so well because they work hard at animating almost every aspect of the game. You will find lively symbols and some 'funny' moments that revolve mostly around the character that I call "the shaman," who is quite burlesque in his appearance and behaviour.

My favourite part of the design is the music and dancing. Yes, the Aztec shaman can be seen dancing and fumbling with the oversized precious gems. The soundtrack is a tribal theme with congas and the din of the jungle in the background. I could pick up some didjeridoo too, which is out of place in a geographic context, but quite charming as a sound effect.

Overall, I think it's the graphic and sound design that makes the Aztec Treasures slot more appealing as opposed to its dated gameplay and extra features, so I'll say it may be worth to check it out yourself.

These older Betsoft games usually come with at least one instant win bonus, but the norm is two. On the other hand, I didn't find a single game from this period that has a free spins bonus that's worth playing for. Usually, that feature comes with a random number of spins and sometimes, a wild reel or a 2x win multiplier.

But when you consider the sheer number of features, they tend to crop up regularly, especially those that have a lower payout potential. Also, Aztec Treasures has a mini-game that I really like for its, well, classical slot-playing features as you'll see in a bit.

This bonus is absolutely outrageous. Just the thought of it, that Betsoft has thought it funny to include such a raunchy gig as part of the gameplay, make me chuckle.

But anyway, the name of the bonus can give you an idea of what's it about. Your input in the outcome is to select the type of gift that the shaman is going to bestow the tribal princesses with.

Upon accepting the gift, they all go inside the love hut which results in fireworks coming out of the windows. By the time the escapade is over, you'll know the number of credits you've won as a random prize.

There are three different gems that can appear on the fifth reel. When three are collected you get to play a bonus game called "Secret Room". There are six doors, each concealing a prize, and three gems. Upon placing the gem in its slot, the door will open and reveal the instant win.

The shaman can appear at random with a spear in his hand, which he throws at the reel set. The symbol that gets the lucky jab becomes wild and can either make a winning outcome or give one a boost in numbers.

If the shaman symbol lands between two of the tribal princesses symbols, the player wins an instant prize and gets to hear a loud smooch. This combination can crop up only on reels 2, 3 and 4 and is limited to paylines 1, 2 and 3.

A simple free spins bonus can trigger if three lizard symbols land on an active payline. You don’t get any other added features, except that the free spins unfold across a default 30 paylines, regardless of your selection. Every lizard symbol that lands on the reels will add +1 spin to your tally.

The paytable has one more bonus symbol - a golden disc that represents the Aztec calendar. You need to see three of these symbols land on an active payline in order to win an instant prize. This bonus is least likely to crop up because the value of the prize is rather voluminous.

Most of the symbols on the paytable can pay a prize and here I am also including the bonus symbols that come with an instant win. In terms of the payout structure, Aztec Treasures doesn't impress with the numbers. The most valuable symbol is that of the shaman, which can pay 300 credits, or 10x your bet, for a win of five of a kind.

The potential symbol payouts may not be able to reach significant sums, but at least they can't fall below 0.5x your bet, which I think is quite decent.

The golden bowl, the emerald, the ruby, and the stepped pyramids can pay between 0.5x and 1x your bet for three of a kind. Not without surprise, none of the symbols can pay for two of a kind, simply because this is a low variance game and that would have made for plenty of winning combinations for those kinds of outcomes.

The game can take a wide range of bets and you can play for pennies if you really want, but that can cause you to miss out on both payouts and extra features, as some of these require an active payline in order to trigger.

I don't mind the low potential of the paytable because I think the game compensates for that with the help of its six extra features. Some of these are instant wins that give your balance a needed boost.

There are two possible events where you can score a significant amount of credits - the free spins bonus - if the game chooses to treat you with extra spins, and the Aztec calendar bonus which is rare but rewarding.

Overall, I think the game is worth trying. It has decent gameplay but nothing overly exciting. Considering it was made in 2013, I think Aztec Treasures has fared well because I've seen it is available in more than a few online casinos.

Browse casinos with Aztec Treasures and other slots from Betsoft. Create an account and try the game for free before making a deposit.

You can play Aztec Treasures in English, Finnish, Swedish, German and 21 other languages. 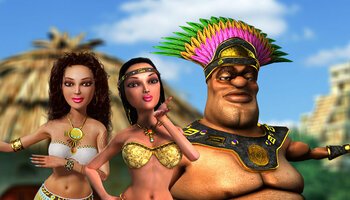