Bork The Berzerker Hack ‘N’ Slash Edition is the augmented version of the original which was released 4 years earlier. This version includes updated graphics and animations as well as expanding reels, stacked wilds and free spins.

This 2018 game is the follow-up to the original Bork The Berzerker which was also released by Thunderkick. Both slots feature the titular barbarian who is looking to rescue his girlfriend from a slew of monsters under control by a nefarious wizard. The game looks amazing with its comic book style graphics and a lot of different animations, which aren’t afraid to get bloody. All of this built around the 5-reel, 3-row playing field with 20 paylines.

All of the symbols in the game are somehow related to the theme, with the high-paying symbols depicting different characters and monsters. Of course, Bork is the Wild who will drop in and slay a monster while he helps the player get some wins. The low-paying symbols are different runes that come in easily distinguishable colours. That way, it’s easy to see when there’s a win.

Although the game does have some music it was actually quite disappointing to hear how toned down it was. During the base game, there wasn’t really any music except when Bork as a Stacked Wild appeared. The sound effects were also very toned down, with really only a simple bleep when a Bonus symbol showed up. I would have expected a lot more bombastic music to go with the graphics.

Bork The Berzerker Hack ‘N’ Slash Edition is a slot that really relishes in the topic, with some very creative monster designs. Bork himself also looks like he walked straight out of a cartoon, reminding me of shows like Metalocalypse even though they aren’t affiliated at all. I did appreciate the game didn’t use card letters or card suits to fill the reel as that would have soured the immersion in my opinion.

Players will be able to pick a bet between £0.10 and £100 per spin as they play the game, which might be a good idea since it has Medium Volatility. Practically that means that players will likely spend some time between wins but that the wins are usually pretty large. This won’t mean that any win will pay back for all the spins up to that point, rather that the slot is more likely to even out in the end.

Obviously, by picking a higher or lower bet this can be influenced, either increasing the risk and the size of the wins, or vice versa. Another element to consider is the max. win of 2,100x your bet. If you wager more the jackpot would be higher but it will also be a considerably bigger drain on your funds if you don’t get any big wins.

As far as the symbols go, you will find the following in this game:

Bork The Berzerker Hack ‘N’ Slash Edition has a selection of features but it was clear to me that the focus for the developers was not on creating a very original gameplay experience. Instead, they had mostly aimed their attention at the look and feel of the game. As a result, the features in the slot are rather standard and won’t surprise a lot of players.

Most of the game takes place on the main screen where we are treated with a rather generic gameplay loop. Players will occasionally see a wild appear on the screen that might help create a win. If the Wild appears on reel 3 it will expand to fill the entire reel. I found that the design of the stacked wild was more interesting than the impact it had on the game, with a special animation.

Getting the free spins mode to activate was about on par as it is with other slots. It won’t be triggered very frequently but it wasn’t exactly rare either. Expect to see it at least once every 100 spins or so. The game will show a brief animation of the wizard capturing Bork’s girlfriend before the bonus game starts.

The free spins mode is largely similar to the base game with the most noticeable difference being the purple background. In terms of gameplay, the major difference is that any Wilds that appear on reels 2, 3 and 4 will now also expand into stacked wilds. This did help me get some bigger wins, and it’s possible to get multiple stacked wilds on the screen at the same time.

Bork The Berzerker Hack ‘N’ Slash Edition is definitely a worthy sequel to the original. Even players who aren’t familiar with the original game will likely have a good time playing this game if they enjoy cartoon violence and similar art.

The gameplay is not as impressive but it is still solid. It stays close to the classic video slot experience with the standard paylines, free spins and wilds. This means that even though there’s nothing really to write home about, it also doesn’t mess up in any way.

With the medium volatility, it might be a great fit for players who aren’t looking to be challenged too much but simply want to have a good time with a nice-looking slot.

Browse casinos with Børk the Berzerker Hack ‘N’ Slash Edition and other slots from Thunderkick. Create an account and try the game for free before making a deposit. 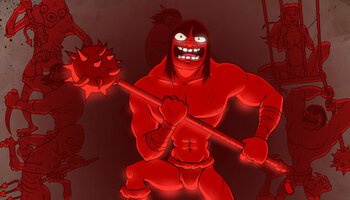