Grab your earmuffs and mittens. We are heading to Russia and meeting the friendly Babushkas. Inspired by the babushka stacking dolls is this 5-reel, 3-column slot with 17 paylines. Developed back in 2016, Babushkas still holds the test of time.

This slot is bursting with colours. The animation is super cute and features a really interesting mechanic. Thunderkick really pushed the boundaries with Babushkas as it’s a truly original slot. Then there is the soundtrack which will get you dancing the Russian Cossack in no time.

All of the symbols (bar the wild egg) are depicted by differently coloured - and aged - babushkas. The older the babushka the higher their value. There is also a Tier 0 babushka known as ‘the ghost.’ This can only appear when the Wipe feature is activated.

All winning symbols of the same value will upgrade to the next value when it creates a new or longer paying line. This will continue happening until there are no more upgrades to be made or all the reels are covered by the same symbol.

The egg appearing on reel 3 can either be wild or it can turn into a Wild Mystery Feature. If the egg shows a star it will open to reveal one of the features.

I am pretty sure that whoever designed this slot was on some form of psychedelic microdosing. That is how wild this slot looks! The graphics, the colour palette, even the animation give you that vibe. But then there’s the soundtrack that sends you straight to cold, Mother Russia. I’ve reviewed a good share of slots in my life but hands down, this is the weirdest one.

Then there are the mechanics which are quite pleasant. There is something very satisfying in seeing the babushkas getting smaller and smaller and your wins getting larger and larger. Volatility is set between low and medium so you do get a lot of entertainment for your money. Of course, that also means the max win is quite low and stands at 390x.

Although Babushkas does sound complicated, it is rather simple once you get used to it. I do suggest quickly going through the information before playing. This is an original game through and through and despite its age, it is still fun to play today.

Browse casinos with Babushkas and other slots from Thunderkick. Create an account and try the game for free before making a deposit.

You can play Babushkas in English, Finnish, Swedish, Norwegian 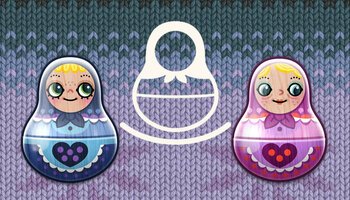