Back to the 70's slot review

There are a number of online slots with a disco theme out there. Most have been relegated to the heap of forgotten games, but some are still available because they have struck a right chord in some players.

Since I don’t tend to be chased away by silly graphics of any slot game, I decided to give “Back to the 70s” a try and get a feel of its rhythm. In addition to a serious disco tune, the game comes with a paytable that offers several symbols with a relatively generous value.

Since the game is designed and created by Wazdan, the players have the option to choose the variance between low, medium or high. This is quite useful depending on how you want to steer your adventure.

“Back To The 70s” is one of the better slots with a disco theme from the few I have played, which includes Barry the Disco Leprechaun. The symbols pay homage to a number of items that represent this musical era. The style in which they have been made is cheerful and, shall we say, groovy?

I’ll be perfectly honest about something though. The game resonated with me only because of my passion for the Simpsons, so whenever I see a reference to disco I am reminded of one of the seldom cameoed characters, Disco Stu.

But never mind that, because the main motivator for me to pull out some disco moves was the game’s payout potential of 5150x your bet.

In addition to the bonus/scatter, two other symbols on the paytable can pay a hefty amount: the disco king can reward you with 250x and the disco queen 100x your bet for five of a kind.

The headphones and the rotating disco lights pay 37.5x your bet for five of a kind.

Five symbols on the paytable require four of a kind in order to make a gain of either 1.25x or 2x; these symbols are the vinyl record, the cassette tape, the pair of novelty sunglasses, the platform shoe and the cocktail.

Also worth noting is that all of the high-paying symbols (minus the bonus symbol) can pay for two of a kind; the prizes are 0.5x and 0.25x. In my opinion, this is a great way to compensate for the wild that is missing.

What I really like about this game is that you don’t have to depend on the free spins bonus in order to achieve a big win. Of course, getting the bonus feature comes with a greater chance for a big win, thanks to the stacked special symbols.

My experience with “Back to the 70s” had me in neutral. You can let the game drive with the smallest bet and see how it turns out. Keep in mind that there is always the option of shifting the random number generator in high variance mode if interested in hunting for the big wins.

Overall, it wouldn’t pain anyone to bob their head to a disco tune, but to get anywhere near that maximum exposure of 5150x you’d need to see the bonus feature retriggering multiple times.

Play Back to the 70's for free

Browse casinos with Back to the 70's and other slots from Wazdan. Create an account and try the game for free before making a deposit.

You can play Back to the 70's in English, German, French, Spanish and 6 other languages.

Back to the 70's supports GBP, EUR, SEK, NOK and 9 other currencies. 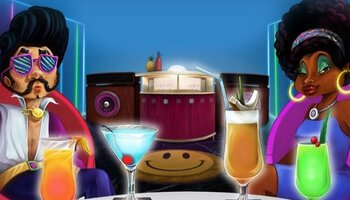